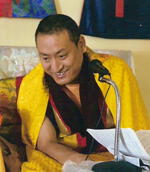 Khachab Rinpoche’s family were refugees from Kham in Eastern Tibet. He grew up herding sheep and yak in Dolpo, Nepal.

His father Younge Gyurme Tulku (Gyurme Dechen Rangdrol) was a student of the previous Khachab Rinpoche. His father related many stories of his previous lives to the present Khachab Rinpoche, and saw many amazing events and signs. The previous Khachab Rinpoche was a Dzogchen meditation master who was also highly accomplished in Chakrasamvara, the 6 yogas of Naropa and Medicine Buddha. He wrote OM AH HUNG into solid rock at Mt Kailash. He had a crow drop a diamond at his feet which is still owned by his brother in N. Tibet at his monastery. The dakinis came to him and gave him the names of his previous lives one of which was the Mahasiddha Thogme Longyang. When he died in N. Tibet, a few days after the ending of breath a white and red stream came from each nostril showing the signs of great accomplishment in Tsa-lung practice. There were many rainbows in the sky for days afterward.

Khachab Rinpoche’s Younge family lineage dates back to the great Dharma King Trisong Detsun and has been associated with the Karmapas for hundreds of years. There have been multiple high lamas and tulkus within his family including the famous Terton Younge Migyur Dorje (or Younge Ternyon) - the crazy Terton, the discoverer of the Dorje Drollo text used by the Karma Kagyu lineage to this day, as well as the Guru Yoga of Karma Pakshi, the Shitro practice, Padmavajra, and many major and minor long life practices. This yogi was famous for the power of his mantra. This terma lineage has a special protector who is a manifestation of Mahakala who rides a red horse. At the site where the termas were revealed the horse left hoof prints in the mud and the yogis left their handprints. A personal Younge shrine room was built around it at their estate but no one dares stay to long except the great yogis of the family every decade or so. It is believed that it is still there.

Khachab Rinpoche’s mother was from the Bonpo Shu Tsang clan, and her family has ancient connections with the Nyingma and Bon from the Mongolian royal family. She was a disciple of Loppon Tenzin Namdag.

When the present Khachab Rinpoche was born his father had a dream of a dreadlocked yogi riding a white elephant coming to him and saying; “I am Khachab Rinpoche”. Later whenever Rinpoche would be returning home his father continuously had dreams of dragons and they became his private messengers or signs. One dream was very clear; as Rinpoche was returning from retreat his father dreamed of 2 great dragons landing to drink from a very clear lake and were rejoicing. The dragons continue to be very great signs for Rinpoche.

Rinpoche was ordained by the 16th Gyalwa Karmapa and began his study within the Karma Kagyu Lineage. However, in 1976, at age 15, he left for Ganden Gelug University in South India to begin his distinguished academic pursuit, obtaining the title of Geshe in the Madhyamika philosophy under the direction of Ganden Trichen Jamphel Shenphen.

Two thousand started in his class, and when Rinpoche finished his geshe training in 1989, only sixty of the original group remained. The training was intensive and difficult. Students were continuously gleaned out through a selection process that required them to be able to publicly answer any question put to them on grammar, philosophy, math, astrology or medicine. He accomplished the difficult exam and was recognized for completing the exam on the Essence of True Eloquence (Lekshe Nyingpo) one of the most difficult and complex works produced by Je Tsonkhapa, founder of the Gelukpa. Afterwards he was given the title of Geshe Uma Rabjampa.

He began teaching at Ganden under the title of Khenpo Jigme Sopa and his students continually ranked first in their exams. However, in 1989, under the advice of his father, he went to Rumtek monastery in Sikkim, the seat of the Karma Kagyu, to complete the traditional 3 year, 7 month retreat in Mahamudra and the Six-Yogas of Naropa and Mahamudra under his Root Lama Bokar Rinpoche.

Rinpoche is recognized as a Khenpo, specifically from the Kagyu Thag-ten Nying Je Ling Monastery. He is still recognized from that Kagyu Gonpa as their first Khenpo.

Rinpoche tells the story of an event that happened there. It was January and extremely cold. The monks had been studying Tummo - the practice of generating the heat of bliss. Many people gathered and in spite of the cold, the monks walked slowly through the crowd, wearing only a thin white cloth. A shawl that had been soaked in ice water was wrapped around each of them. Those that had successfully mastered the Tummo practice were able to sit on the frozen lake and dry the shawl with their body heat, but many were soon shaking and shivering.

He was invited to teach at Nying Gen Ling monastery in Nepal where he stayed for several years however he felt the need to pursue the Dzogchen studies of Nyingma and Bon after realizing the profound path of Rime has been followed by all the great realized masters of the past. He received further Mahamudra clarifications with the Drikung Drubwang Rinpoche and stayed in retreat again for four months under his personal direction.

Younge Khachab Rinpoche is considered to be a highly qualified Tantra and Dzogchen teacher. His training has incorporated the view and meditations of the four main schools. He believes in the transmission of the uncompromised, pure teachings of the oral and textual lineages. He represents the Rime philosophical tradition, established in part by Jamgon Khamtrul, incorporating the best the four schools in Tibetan Buddhism have to offer.

Younge Khachab Rinpoche is acknowledged as a traditional master of the Mahamudra and Dzogchen practices. He received all signs of accomplishment in the Six Yogas of Naropa, particularly Tsa Lung and Dream Yoga. He is fully able to transmit all stages of the Vajrayana path. He holds the titles of Geshe and Khenpo and he is known in India and Nepal for his vast knowledge of the Rime tradition.

Younge Khachab Rinpoche is also Terton, a "terma" revealer (hidden treasures of precious teaching) and is currently having these texts translated.

Rinpoche lives and teaches in Madison, Wisconsin, and gives teachings around the world.

In addition to his root lama Bokar Rinpoche, Khachab Rinpoche has received transmissions from the great masters of all traditions including H.H. Dilgo Khyentse, H.H. Dudjom Rinpoche, H.H. Penor Rinpoche, H.H. Chobgyed Trichen Rinpoche, and Khenchen Phyentse, a heart disciple of the Dzogchen master Khenpo Munsel. He studied the Bon Dzogchen tradition with Lopon Tenzin Namdhak Rinpoche. His Dzogchen master was the hidden Nyingma yogi Dingri Khenchen who has lived his whole life in isolated retreat.

In 1998 H.H. Dalai Lama invited him for an interview and philosophical discussion. After being introduced and quizzed by His Holiness his interview extended for nearly an hour due to the delight and satisfaction of His Holiness.