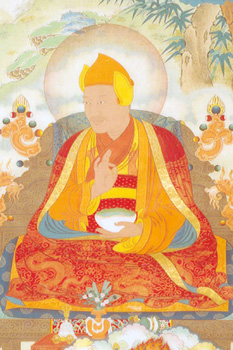 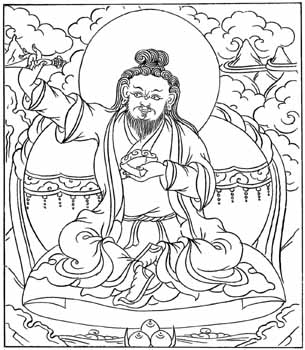 Gyalwa Yungton Chenpo Dorje Pal also known as Yungtön Shikpo (1284-1365 or 1296-1376) of the Len clan, was born in the wood-snake year into a family of Nyingma tantric practitioners at Gorma (or Gurmo) near Shalu Monastery, in the province of Tsang. At the age of 5, when his mother took him to the market-place, he met Trophu Khenchen Sonam Senge, a great scholar and showed such great devotion he was given the refuge vows and the precepts of a lay practitioner on the spot from him.

Guided by Lama Zurchung and Lama Baley (I do not know who these two are) at the age of fifteen he entered the famous Nyingma Ugpalung Monastery, where he was instructed in the Tantras. Zur Jampa Senge imparted the mdo sgyu sems gsum, representative of the "distant lineage " (bka' ma ), teachings to him. This consisted of the Mahayoga, Anuyoga, and Atiyoga instructions. Shangpa Shak Bum gave him the Yamantaka cycle of empowerments and teachings. He also studied at the monastic college Zhalu and became a famous scholar, learned in dialectics, Abhidharma, and the mantra-traditions, of the both the ancient and new.

He studied and practiced under many of the greatest masters of his time. Having mastered the methods and the yantra ('khrul khor), his magical power became great, thus he became one of the most respected and renowned teachers on the Tibetan Plateau.

During his youth he went to China on the command of the Emperor where he performed before the Emperor religious dances and many other such rituals. At that time many villages, which had to pay tribute in grain to the Emperor, were suffering from drought. They therefore requested the Emperor to send someone who could cause rain to fall. Thus once there he prayed to the Three Jewels , and rain began to fall. The Emperor was greatly pleased, and gave him numerous presents.

He gained a deep understanding of the Kalachakra under Butön Rinpoche (bu ston rin po che) and cultivated the esoteric instructions, particularly the Great Perfection due to the great inspiration of Karmapa Rangjung Dorje to whom he became a principal student of. It is recorded that he attained the highest realizations after he met with the third Karmapa, thus becoming the next lineage holder and teacher of the fourth Karmapa Rolpe Dorje.

He resided and taught in various places such as Paro in Bhutan, Phungpo Riwoche, and Ratam Trak and at some point was appointed a scholar at Zhalu Monastery at which time he was known by the name Dorje Bum, “Vajra Vase”. He composed many well known and great treatise, like his "Illuminating Mirror" (dpal gsang ba'i snying po'i rgyud don gsal byed me long), a commentary on the Guhyagarbha Tantra which later came to surpass most other exegetical traditions in its popularity. He passed away at the age of eighty-two.

In the lineage of the Tibetan Penchen Lama, there is considered to be four Indian and three Tibetan incarnations of the Buddha Amitabha, before Khedrup Gelek Pelzang, 1st Panchen Lama. The lineage starts with Subhuti, one of the original disciples of Gautama Buddha. And Yungton Dorjepal is considered to be the final Tibetan incarnation of Amitabha Buddha before Penchen Lama Khedrup Gelek Pelzang.