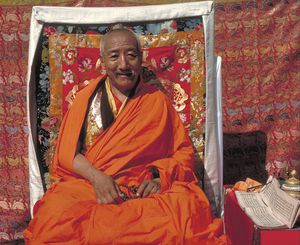 The former Pawo Rinpoche, Tsuglag Mawe Wangchuk (gtsug lag smra ba'i dbang phyug) was born in Tibet in 1912. He was recognized and enthroned by the 15th Karmapa Khakyab Dorje (1871-1922). Like all previous Pawo Rinpoches, he was a close disciple of the Karmapa and the Tai Situpa.
The Karmapa treated him like his own son and bestowed the transmissions of the entire Kagyu lineage upon him. In 1925 he met the 13th Dalai Lama Thubten Gyatso (1876-1933) in Lhasa, who bestowed the name Thubten Kunsal (thub bstan kun gsal) onto Pawo Rinpoche. After having completed his formal education he spent many years in retreat. He was one of the teachers of the 16th Karmapa Rangjung Rigpe Dorje (1924-1981).
In 1959 Pawo Rinpoche left Tibet and went to Bhutan and later to Kalimpong. Due to a fragile health, he later went to southern France where he stayed for many years. He lived a rather secluded life and established the retreat centre "Nenang Samten Choling" there. Just a few years before his passing away in 1991, he returned to Nepal and established a monastery in Boudhanath, Kathmandu.