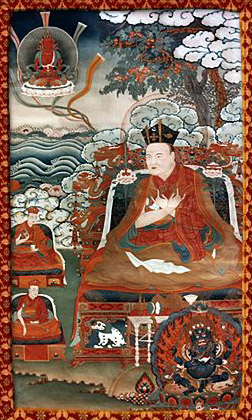 Born in the Tsang province in central Tibet. He was recognized and enthroned by the Kyabgon Drukchen Mingyur Wanggi Gyalpo along with Jamgon Kongtrul, Jamyang Khyentse Wangpo, Terchen Chokgyur Lingpa, and Pawo Tsuklak Nyinchey. He received the transmissions of teachings from Jamgon Kongtrul Lodro Thaye and studied with many great masters, including Khenchen Tashi Ozer. He gave empowerments throughout Tibet, and preserved many rare texts by having them reprinted. Khakyab Dorje was the first in the line of Karmapas to get married, and had three sons, one of whom was recognized as the second Jamgon Kongtrul Palden Khyentse Öser. Among many disciples, his closest students were Tai Situ Pema Wangchok Gyalpo, Jamgon Kongtrul Palden Khyentse Öser alias Karsey Kongtrul, and Beru Khyentse Lodro Mizey Jampey Gocha. Some years before his passing into parinirvana, he entrusted a prediction letter to his closest attendant.

Khakyab Dorje was also one of the predicted lineage holders of Chokgyur Lingpa's termas.

The Fifteenth Karmapa, Khakyab Dorje (1871-1922) was born in Shelkor village in Tsang province in Central Tibet. As soon as he was born he uttered the mantra of Chenrezig, and at the age of five he was able to read the scriptures. The ninth Kyabgon Drukchen recognized and enthroned Khakyab Dorje. The Karmapa received the entire cycle of Kagyu teachings from Jamgon Kongtrul Lodro Thaye. He also studied with Khenchen Tashi Özer and many others. He travelled throughout Tibet giving teachings and empowerments. He identified the reincarnations of Jamgon Kongtrul Lodro Thaye and the Situpa and performed the rituals at their respective enthronements. Khakyab Dorje was a married master and had three sons. The second Jamgon Kongtrul and the twelfth Shamarpa, Jamyang Rinpoche were his sons. The Karmapa also reprinted many scriptures that had become rare and difficult to obtain. His closest disciples were Situ Pema Wangchog Gyalpo, Jamgon Palden Khyentse Özer and Beru Khyentse Lodro Mizay Jampa'i Gocha. Khakyab Dorje passed away in his fifty-first year.