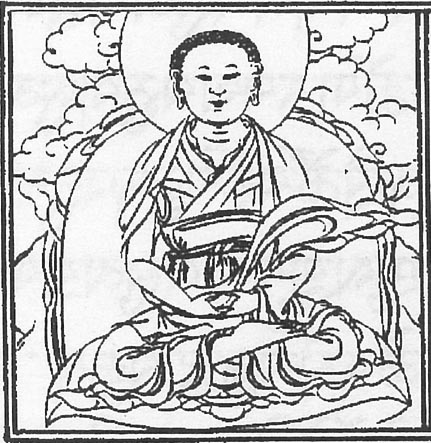 a ro ye shes 'byun gnas: a ro had been an incarnation. He assumed the appearance of a small boy concealed in the sand near the ring mo spring. A royal nun saw him there, [R:1000] having come there for a walk, she thought that “people might start gossiping, if I were to take the child with me out of mercy”. She reported the matter to an official of the locality, who said to her: “Well, poor thing! Take him!” She took the child. He lay down like a corpse, and emitted the sound of “a-a”, because of this he was called “a ro”. Later when the child learned to walk, he went inside an enclosure (kun dga 'ra ba) where monks were telling their prayers.

The monks asked him: “A ro! What are you doing here?”

The child replied: “I shall also recite prayers.”

“Do you understand the Doctrine?” they inquired, and the child replied: “I know well many doctrines!”

“Well then, do you know this also?” and they handed him a volume of the bodhicaryāvatāra, and he recited it in a pro­per manner.

“I also know some doctrines unknown to you!” said A ro, and recited several names of precepts belonging to the system of A ro.

All the monks became amazed, saying: “A ro is A! He is the origin of knowledge!”

Thus he became known as ye shes 'byung gnas. He had a long life, and guided disciples with the help of profound precepts. He also laboured for the welfare of living beings. His disci­ples were: ya zi bon ston of khams, bru sha rgyal bu of kha rag, grunt shing shes rab smon lam of dbus, caog ro zans dkar mdzod khur of, gtsang . Of the above, ya zi bon ston proceeded to dbus and gtsang, and preached the Doctrine to gru gu klog 'byung of Upper gtsang rgyan. The latter taught it to glan sgom tshul khrims snin po of bras chu bar.