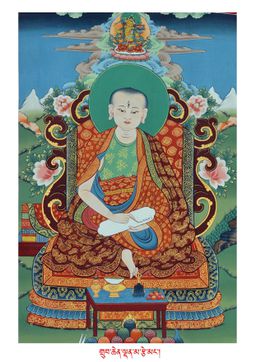 Denma Tsemang (lDan ma tse mang). Important early Tibetan translator of the Tripitaka, secretary and scribe to the king and Padmasambhava. Extremely well-versed in writing -- the Sanglingma mentions him as "Tsemang of Denma who was the most eminent in fast writing" -- his style of calligraphy has continued to the present day. Having received Vajrayana transmission from Padmasambhava, he had realization and achieved perfect recall. He is said to be the chief scribe who wrote down many termas, including the Assemblage of Sugatas, connected to the Eight Sadhana Teachings. Also he is decribed as "the bilingual Denma Tsemang, a helper to the translators, he was accepted as a disciple by the king of spiritual instructions from Oddiyana, Guru Rinpoche. Denma Tsemang became the main recipient of the Wrathful Mantra deity meditation instructions, and served as a scribe for many of the yellow parchment texts."