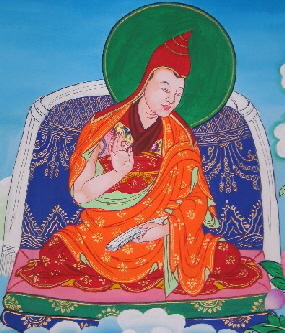 Born in 1699 in Dege, Gyurme Tegchog Tenzin was recognised as the second Dzogchen Rinpoche by his predecessor's main students, Great Treasure Revealer Nyima Trakpa, Ponlop Namkhe Ozel and Minling Terton Gyurme Dorje. During his youth Rinpoche made the journey to central Tibet twice and, studying with over forty spiritual tutors including HH Seventh Dalai Lama Kalsang Gyatso, he mastered the whole collection of sutras and tantras. Most importantly, Rinpoche’s ordination lama, Ponlop Namkhe Ozel, passed onto him the complete Great Perfection hearing lineage, just as he had received it from Dzogchen Pema Rinzin.

According to Rinpoche’s instructions, the king of Dege built the great treasury of Dharma Dege Barkhang, and it remains today the largest and most famous scripture printing house in Tibet. From his seat in Dzogchen, Gyurme Thekchok Tenzin would expound the teachings tirelessly, day and night, grant empowerments and give personal instructions of the Great Perfection. He also composed the commentary on the preparatory practices of the Khandro Nyingthig entitled the Good Chariot that Leads to Liberation. He passed beyond sorrow in 1757 at the age of fifty-nine.

The Second Dzogchen Rinpoche was born in the Northern land of Mongolia and enthroned as Gyurme Thekchok Tenzin Thutop Wangpo Chok Thamchele Nampar Gyalwe De. He studied with many teachers including Ponlop, Rabjampa and other disciples of the previous Dzogchen Rinpoche [Pema Rikzin], as well as Gyalwang Kalzang Gyatso, Lochen Dharma Shri, Gyalse Peme Gyurme Gyatsho, Terchen Nyima Trakpa and son, Ngor Khenchen Palden Chokyong, and others. In this way, his mind stream was ripened through the Vinaya, Bodhisattva, and Mantra [trainings].

As prophesied, the night before he received the teachings and instructions from The Dalai Lama on the Three Objects, Vajrasadhu himself showed up in person and offered the Buddha statue called the Yuthöma, and many other statues unequalled in the world.

Outer signs of his attainment of siddhi became obvious to all, as when there was an eclipse of the moon and the sun remained in the sky for twenty-four hours, postponing the oncoming day. This master inspired many great virtuous activities, such as the establishment of the great treasury, the printing house at Lhundrup Teng in Derge, by his patron, the King of Derge. He initiated practices of the sadhanas of: Phurba Yangsang [innermost secret practice of Vajrakilaya], Lama Demchok Khorlo [Chakrasamvara], Shinje [Yamantaka], Trochu [ten wrathful deities], Kingkang, Mati Sengmar, Kagye Trowo Rolpe Tordok, and other practices of the Kama and Terma traditions [at Dzogchen Monastery], and activities there continued to grow.

Among his many students, his main disciples were the Second Rabjam Gyurme Kunzang Namgyal, Ponlop Sangngak Tendzin, Nyitrul Pema Thekchok, Jetsunma Migyur Paldron. From these, the lineage was spread and became a great source of nourishment for the profound, secret, and essence teachings.