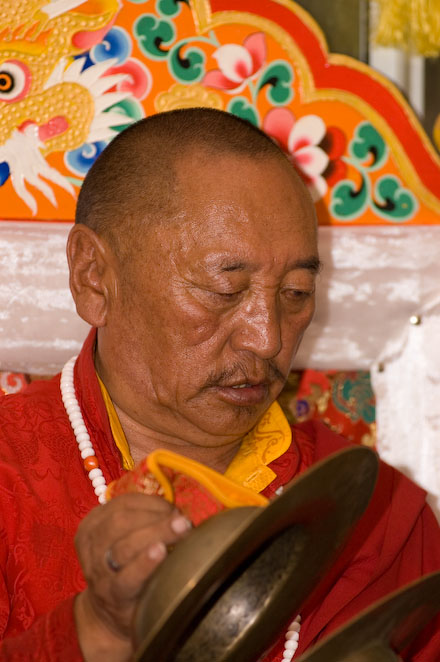 8th Lho Kunsang Chöchog Dorje Rinpoche, was born in the sheep water year (1942) in Anchung Phuk of Bumzong, a holy place in the Eastern Tibet. His father was Bon Yungtrung Gyaltsen of the Dorong family lineage, and his mother was Lhamo, the cousin of Khyen-trul Kunsang Drodul (a great Lama). At the time of Rinpoche's birth, there were many auspicious signs accompanying it such as bucket of water transforming into milk, bright celestial light hovering above and many others.

When he was five years old, His Holiness The 16th Gyalwa Karmapa, Khyentril Kunsang Drodul and many others recognized Rinpoche as the successive eighth reincarnation of previous famous Lho Konchog Trinlay Namgyal Rinpoche. The origination of Rinpoche's successive incarnation is traced back to Palgyi Yeshe, one of the 25 disciples of Guru Rinpoche.

The present 8th incarnation was enthroned when he was nine at his previous monastery Palme Gonpa and re-established his commitment and continue to guide all his previous followers. Many representative from different monastery participated the auspicious event including the King of Nangchen. All the abbots, monks and local folks celebrated joyously for many days.

Rinpoche studied under the guidance of many great masters. At the age of 11 to 16, Ripoche attended the Buddhist Shreda (Collage) where he studied the vast knowledge of Buddhist philosophy in both the Sutra and Tantra systems. To name a few of Rinpoche's spiritual guidance namely; Khenpo Khyenrab, Khenpo Lektse, On Acho, Khenpo Kungo Namgyal, Dzurmang Khenchen Sangye Gyatso, 2nd Jamgon Kongtrul, Khyentse Özer, and many others. During this time Rinpoche also studied many other subjects such as astrology, poetry, art, ritual performance and appropriate placement of religious structures.

The next chapter of Rinpoche's life was a difficult transition. During the Cultural Revolution in China, a highly learned and skilled in the Dharma individual were put in labor camps while many others were imprisoned and subject to harsh treatment. Rinpoche endured great hunger and physical hardship like many other inmates in the prison. During the day he was forced to work as a blacksmith, carpenter and tailor. But at night he would forego sleep and continue his Buddhist studies and practice.