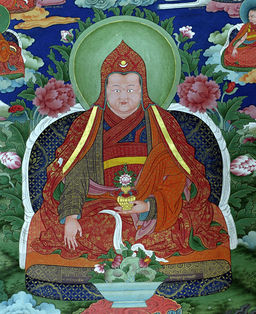 in the Earth Sheep Year (1499), on the 10th day of the 7th lunar month, amidst auspicious signs, Dawa Gyaltsen was born in Bumthang to Tertön Pema Lingpa and mother Sithar who was an emanation of Shelkar Tshodron. From a young age, he displayed signs of great meditative realization and concentration such as moulding the stones like mud with his feet. Just by looking once, he was able to learn the arts and crafts very easily. Even the dakinis and protecting deities paid great reverence and protected him, so much so that Pema Lingpa is said to have remarked to his disciples that if even the non-humans and devas regard him thus, he seems to be an extraordinary being and hence all of you must not think of him as equal to ordinary beings.

From his father he received all the essential teachings such as Lama Norbu Jamtsho, Dzogchen Kunzang Gongdu, Thukje Chenpo Munsel Dronme, and through their sadhana practice and mediation, he was able to actualize the teachings and had visions of the Guru, deity and dakini as signs of accomplishment.

Moreover, he received blessings and empowerments directly from the male-female aspect of Guru in a meditative trance. Having transported himself to Purelands such as Zangdog Pelri (Copper-coloured Mountain) and those of the Five Buddha families, he was able to see the Buddhas and the Bodhisattvas.

When he was twenty-three years old, his father passed away and as prophesied by Guru Rinpoche, the relic from his father’s heart, an image of a turquoise girl, dissolved into Thuksé Dawa Gyaltsen. Then, from the Chel region in Tang area, from the Menchu River, he discovered the statue of Vajrapani and the precious seven-rebirth mother pills in the form of a joined skull. From Naring Drak, he discovered precious substances that had the power to repel the invading armies.

In places such as Lhasa and Samye in Tibet, he performed numerous army-repulsion, consecration ceremonies, Drupchens, blessings and empowerments, thereby benefiting many fortunate beings in the process.

Then, having traveled far and wide within Bhutan, covering mostly the sacred places, Thuksé Dawa Gyaltsen gave teachings, blessings and precious substances to many sentient beings, thereby, leading them on the path to liberation. He also built monasteries such as Lhundrup Deyang at Trakar in Chumey and Gongted Sergi Lhakhang at Tali in Kheng.

Thus, fulfilling his Dharma activities for this lifetime, in KhariThabtsang at the base of Mt. Kulagangri, at the age of 88, in the year 1586, on the 17th day of the 9th month of the Fire Dog Year of the 16th Rabjung, he demonstrated the act of passing into nirvana.
(from Gangteng Tulku's Yeshe Khorlo Web-sile[1])