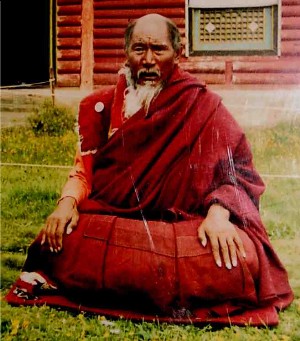 Khenchen Munsel Rinpoche (1916-1994) of Wangchen Topa, Golok; was a highly accomplished and respected Dzogchen Master and scholar who in turn instructed some of the greatest living and present-day Lamas. A student of Khenpo Ngawang Palzang, he was imprisoned by the Chinese for many years, during which he taught the Dzogchen teachings, including Yeshe Lama (ye shes bla ma), Choying Dzo (chos dbyings mdzod) and the Nyingtik/Men-ngak Nyengyud Chenmo (snying tig snyan brgyud chen mo/man ngag snyan brgyud chen mo) to other lamas in the prison, including Adeu Rinpoche and Garchen Rinpoche.

Khenpo Munsel gently looked at Traga Rinpoche and said, “Your karmic propensity is to practice Dzogchen. I am your karmic lama. If you can meditate, you have today found the way to liberation in one life. You will never find something like this even if you went to look for it with your horse’s hooves encased in steel. Spend one year near me and meditate.”

While the boy was still an infant, Yungshul Lama Sungchok Dorje (g.yung shul bla ma gsung mchog rdo rje, d.u.) visited their home and identified the child as an embodiment of the great Nyingma master, Longchen Rabjam (klong chen rab 'byams, 1308-1364). Sungchok Dorje is said to have made a prediction that the child would eliminate the darkness of his followers’ ignorance and thus named him Munsel, meaning “Eliminator of Darkness.” The young Munsel was said to be incredibly intelligent, learning reading and writing from Sengshul Lama Choku (seng shul bla ma chos sku) at an early age. Apparently, he was also a very attractive as a young man, and so came to be known as Khangsar Benyakma (khang gsar ban yag ma) meaning “handsome man of Khangsar.”

Munsel's biography estimates he studied one hundred voluminous texts, out of which he mastered twenty-five. His performance during the public tests administered by the monastery is remembered as a demonstration of this erudition. He was also known to have specialized in the Dzogchen Nyingtik (rdzogs chen snying thig) tradition. Munsel eventually founded a dharma center in Ponkor Ngakgon (dpon skor ngag dgon) where he served as abbot for around twenty years.

At some point in 1959, Munsel was assaulted by members of the Chinese People's Liberation Army. He was beaten close to death, but was said to have remained mentally stable and peaceful during the attack. Afterwards, he was imprisoned in the district jail for about a year, and was then transferred to the so-called "Lama's Jail" in Xining, the provincial capital of Qinghai. The facility lacked sufficient food, clothing and shelter, causing great hardships for its residents, but it is reported that the conditions did not adversely affect Munsel, and that he was able to continue to practice in secret. He was known to have given a share of his food to his companions in jail, and at one point lived without food for several weeks during a period when nourishment was scarce. Despite fasting for such a long time, his health was observed to be even better than before his imprisonment; as a result, many of his fellow prisoners and even many of the jail's staff are reported to have become his students.

As conditions slowly improved, Munsel began to give Dzogchen instructions to those imprisoned with him, including a number of high lamas. While in jail, he became the root guru of the Eighth Garchen, Konchok Gyeltsen (mgar chen 08 dkon mchog rgyal mtshan, b.1936), an important Drigung lineage holder who currently travels widely; and gave Dzogchen instructions to the Eighth Adeu Rinpoche (a lde'u 08, 1931-2007), a Drukpa Kagyu lineage holder. One of his elderly Chinese devotees was even said to have attained a rainbow-body ('ja' lus) at the time of his death.

Munsel spent a total of eighteen years doing hard labor at Dzagyo Factory (rdza gyo bzo grwa) in Xining. His biography relates that he practiced Dzogchen throughout this period by mentally visualizing the factory as a meditation cabin and the tools he was using as ritual implements. Through these methods, he is believed to have gained great spiritual accomplishment. While in jail, he composed a note on the essential teachings of Dzogchen, but burnt it when he acquired a similar note that was written by his teacher, Khenpo Ngawang Pelzang.

After spending a total of twenty-two years in prison, Munsel was released. He returned to his hometown in Golok and resumed his activities, teaching both general topics and advanced tantra. In 1984, the wood-mouse year of the sixteenth sexagenary cycle, he founded a monastery named Tashi Chokhor Ling (bkra shis chos 'khor gling) in a plain named Yumchen Tang (yum chen thang), which he renamed Chokhor Pemai Thang (chos 'khor pad+ma'i thang). Tenpa Dargye (bstan pa dar rgyas, d.u.), one of Munsel's main disciples, was enthroned as the abbot of the monastery, and around fifty boys were admitted, granted monastic vows, and installed as resident monks. The course of study at Tashi Chokhor Ling was based on the traditional curriculum at Katok and included classes on Mādhyamaka and Pramāṇavārtika. Priority was also given to training the monks in the rituals of the Longchen Nyingtik treasure cycle.

Munsel gathered several hundred lamas and monks from various places around the region to resume their traditional prayers and religious festivals, such as a regular Guru Rinpoche feast on the tenth of the Tibetan month (tshes bcu). Emphasizing the importance of Vinaya, Munsel also reintroduced the Rainy-Season Retreat as an annual activity at his monastery. Gradually, the number of people seeking monastic vows under his guidance increased and the number of resident monks grew.

Munsel founded another dharma center (chos sgar) at Gomme Oseltang (sgom med 'od gsal thang) in the Nyikhok (rnyi khog) region of Kham. Gome Oseltang became his main residence, from where he continued to practice and teach on clear light ('od gsal) according to Dzogchen Nyingtik practice. He remained there for the rest of his life. Thousands of disciples were said to have gathered to receive his teachings.

In his later life he was often presented with large quantities of gold, silver, agate, and other precious stones as offerings. He sent these to Tibet's first monastery, Samye (bsam yas), in order to support its maintenance and restoration. He donated one hundred thousand Chinese Yuan to create a fund that supported around seventy resident monks at Samye, and donated forty thousand Yuan to sponsor the production of woodblocks of the writings of Ngawang Pelzang and other religious texts. These were preserved at Nyoshul Jonpalung Monastery, where he had originally studied the Longchen Nyingtik with Ngawang Pelzang. He also donated several kilograms of expensive coral to Katok Monastery to sponsor the creation of objects of faith. Holding the view that luxuries were an obstacle to genuine dharma practice, he eventually donated his remaining belongings, including statues, books, and other valuable goods, to Ponkor Monastery, which he had established before going to prison, retaining only some basic objects for his daily use. He spent his remaining life living as a simple monk.

In February or March of 1994, on the full-moon day of the twelfth month of the water-bird year in the seventeenth sexagenary cycle, Munsel passed away at his residence in Gome Oseltang at the age of about seventy-seven. Tenpa Dargye and his assistants kept his death a secret for seven days. The local people, however, were said to have observed many miraculous signs which according to tradition accompany the passing of a great master, and the news quickly spread. Khenpo Pema Lodro was invited to rouse Munsel from his post-mortem meditative state (thugs dam). They performed rites and rituals for purifying his body, dressed him in tantric costume, positioned him to hold a vajra and bell, and sat him on a throne to give audience to devotees for twenty-one days. Ponkor Monastery sponsored prayers and made extensive offerings including an abundance of torma and butter lamps. The detailed pre-cremation rites and rituals, performed by a number of lamas, were led by the abbot of Nyoshul Monastery (smyo shul dgon pa), Sanggye Tsering (sangs rgyas tshe ring, d.u.), Getse Tulku Gyurme Gyeltsen (dge rtse sprul sku 'gyur med rgyal mtshan, d.u.), and Katokpa Jamyang Gyeltsen. The cremation was done in accordance with the "Fire Puja of the Four Activities" (las bzhi'i sbyin sreg). Seven days after the cremation relics (ring bsrel) were discovered in his remains, including images of wrathful deities embossed on his skull and peaceful deities on his spine. His disciples and devotees built a two-story stupa decorated in gold and silver and a temple to house his relics.