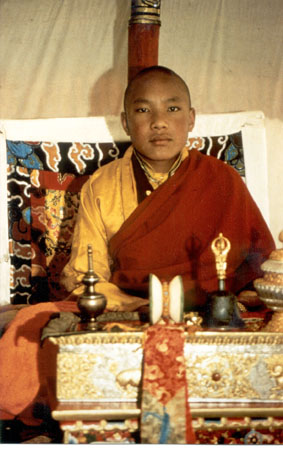 Born in Kham, Tibet to largely nomadic parents, Ogyen Trinley Dorje is said to have identified himself to family members as the Karmapa early in childhood. He was seven years old before he was recognized by a search party headed by the Tai Situpa, following instructions left by the previous Karmapa in a prophetic letter and hidden in a locket. Ogyen Trinley Dorje was installed at Tsurphu (Wylie: Mtshur-phu; ZWPY: Curpu) monastery, the traditional seat of the Karmapa in Tibet, where he lived for another seven years.

Over the 2000 Millennium he escaped to Nepal and then India, arriving in the Dalai Lama's exile headquarters of Dharamsala on January 5, 2000. Ogyen Trinley Dorje had felt that he was unable to obtain in China the specialized instruction he needed to complete his studies and to realize his full spiritual authority.

A controversy exists over the identity of the true 17th Karmapa: the Shamarpa, arguably the second highest Karma Kagyu lama, does not recognize Ogyen Trinley Dorje and instead has proclaimed another boy, Trinle Thaye Dorje (Wylie: phrin las 'mtha yas rdo rje), whom he identified a few years earlier, as the true Karmapa. Ogyen Trinley Dorje, however, is supported by most of the Kagyu hierarchy, including two of those charged with finding the new Karmapa: Tai Situpa and Goshir Gyaltsab Rinpoche (a fourth such lama, the 3rd Jamgon Kongtrul, died shortly before the controversy arose.)

As of 2006 he resides at Gyuto Monastery in Sidhbari, near Dharamsala.

Ogyen Thrinle Dorje, o rgyan phrin las rdo rje, (b.1985). He became famous the world over for his daring escape from Tibet, arriving quite unexpectedly in early January 2000 in Dharamsala. The 17th Karmapa was born in 1985 in Kham/East Tibet and enthroned in his ancestral seat of Tsurphu in 1991. After it became apparent, that the Chinese government would not allow him to pursue his education as he intended, he escaped from Tibet and crossed the Himalayas in the depth of winter. He presently resides near Dharamsala where he has resumed his studies under various tutors.

Kagyu Office, the official website of the 17th Karmapa