Name of teacher (name in wylie) 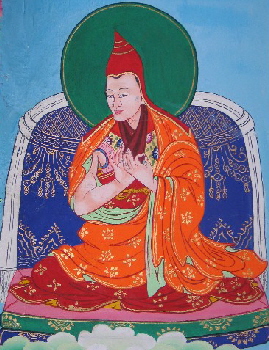 Born in Kham in 1759, Ngedon Tenzin Zangbo clearly remembered his previous lives and as soon as he could talk explained that he was a tulku from Dzogchen Monastery named Pema. He correctly recognised the prayer beads, dorje and ritual bell that were used by his predecessor Gyurme Thekchok Tenzin. When Ngedon Tenzin Zangbo was four years old the dharma king of Dege was chief amongst those who invited him to take his place on the golden throne of Dzogchen. From the age of seven he began the study of reading and writing, and he took the vows of a novice monk from the second incarnation of Nyima Trakpa Tenpe Gyaltsen, receiving the ordination name Ngedon Tenzin Zangbo.

He studied under many masters, foremost of which were Gatok Drimit Hinjong and Barla Tashi Gyamtso, receiving from them all the major empowerments, lineage transmissions and teachings of the Nyingma school. Most importantly his previous incarnation's main disciple, Master Pema Kontul, gave him the complete transmission of Dzogpa Chenpo. When he was twenty years old he travelled to Lhasa to meet His Holiness Eighth Dalai Lama Jambal Gyatso, and was honoured with the title Hutuktu Tolo or Highest of Lamas. Minling Khen Rinpoche also ordained him as a Gelong or fully ordained monk.

At around that time All Knowing Jigme Lingpa prophesised the building of a retreat centre in the upper valley of Dzogchen, and this prophesy was fulfilled by Ngedon Tenzin Zangbo. A total of thirteen practitioners subsequently attained enlightenment through the rainbow body there. As a treasure revealer and author Ngedon Tenzin Zangpo produced thirteen scriptural volumes and, relying on his guidance, many disciples including Jigme Trinle Ozel, Jigme Gyalwe Nyugu and Sengtruk Pema Tashi, mastered the view of Dzogpa Chenpo. Not only that, he constructed many new temples and founded the annual ceremony and celebration of the New Year that is still held in Dzogchen to this day. He passed beyond sorrow at the age of thirty-four, his activities of building, teaching and practice having greatly expanded the monastery.

[The third Dzogchen Rinpoche was born] in the north, on the right side of a gently flowing blue river in the Dzachu region, in the tribe of H'or. After being enthroned, Ngedon Tendzin Zangpo Ati Tenpe Gyaltsen sat at the feet of many learned and accomplished masters, such as the Dzogchenpa Rangjung Dorje. He perfected the learning, contemplation and concentration on the points of the Dzogchen Khandro Nyingthik practices and gave innumerable teachings on the Kama and Terma traditions of the Old Translation School.

Countless beings who held the lineage received the ripening empowerment and liberating instructions, including his main disciples Dodrupchen Kunzang Shenphen, Barchung Jigme Gocha, Sengtruk Pema Tashi. In the upper part of the valley, he established a retreat center where thirteen retreatants attained the luminous halo or [later attained the] rainbow body. In the middle, he established thirteen dharma learning centers for [Düpa] Do, Gyu[trul Drawa] and others of the Kama tradition and for the flawless tradition of sutra and tantra. In the lower part, he set up thirteen great water wheels of mantras so that even the water element served the dharma. Many texts of the New and Old [translation schools of tantras] teachings were printed, continuing the incomparable virtuous and kind activities benefiting both this and other lineages of dharma.