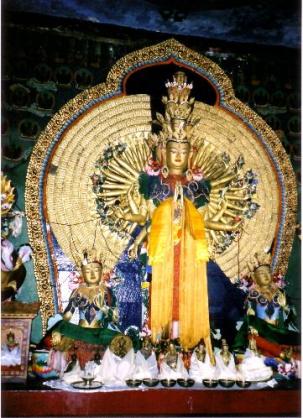 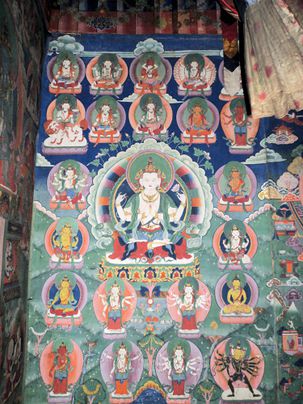 Avalokiteshvara (spyan ras gzigs) The bodhisattva of compassion; an emanation of Buddha Amitabha.

dpal mo - most glorious (refering to females) [consort of Chenrezig, she that sprung from the ocean of milk] [IW]

mi tra dzo gi - Mitra Yogi. A siddha from India who received teachings from Chenrezig who appeared to him. The transmission of his "Six Vajra Yogas" is still alive and can be found in Volume 16 (Ma) of the gdams ngag mdzod of Jamgön Kongtrül ('jam mgon kong sprul blo gros mtha' yas, 1813-1899) [RY]


The following is from The Courage to Feel: Buddhist Practices for Opening to Others, by Rob Preece, published by Snow Lion Publications.

The story is told that when Avalokiteshvara, the Buddha of compassion, was looking at the lives of human beings upon this planet, he saw how much pain and suffering we inflict upon each other, and for a moment his compassion faltered. He almost abandoned his vow to liberate us from suffering. At that instant, his body exploded into a thousand pieces, represented in the image of the thousand-armed Avalokiteshvara. If this can happen to the figure who, in Buddhism, most exemplifies compassion, then perhaps we can be forgiven for not always finding it easy to sustain a compassionate heart in the face of so much suffering in the world.

We may live in times when material, economic, and scientific progress is moving at a rate never before seen, yet our capacity to live peacefully alongside each other seems to remain elusive. When confronted with the constant evidence of so much brutality and corruption present in the world, whether this is seen on the news or experienced closer to home, it is common to feel a sense of anger and outrage, and to feel powerless to do anything to change the ignorance, greed, and hatred that motivate most of the atrocities our fellow humans inflict upon each other. Are we, individually or collectively, able to go beyond the dominance of our instinctual selfishness that reaps so much harm?

...Whatever spiritual tradition we may be part of, if we wish to live our lives with greater openness to others, and with the courage and heart to cope with adverse conditions, we have much to learn from the path of the bodhisattva. The bodhisattva, sometimes translated as "the awakening warrior," dedicates his or her life to the welfare of others and is willing to face the challenges of life to do so. The bodhisattva's way of life does not lead to a spiritual escape from the reality of the world. Rather, the bodhisattva cultivates the capacity to live within the raw reality of suffering on the ground and transform life's adverse circumstances into a path of awakening. A bodhisattva makes a clear decision to remain embodied and in relationship to life even while reaching states of awareness that go far beyond our normal reality. Such a person is said to renounce the peace of nirvana and overcome the fear of samsara. What gives this attitude to life a particular significance is that it recognizes that only through fully awakening our innate wholeness can we achieve the greatest benefit to others.

Central to this approach to life is a quality of intention called bodhichitta, often translated as "the awakening mind." The awakening mind is most often described as the clear, compassionate intention to attain the state of buddhahood for the welfare of all sentient beings. While "the awakening mind" may seem like a relatively simple phrase, its actual psychological, emotional, and social implications are huge. It is a reorientation of the whole of an individual's direction and meaning in life, rooted in a deep sense of compassion and responsibility towards the welfare of the world.

In the mahayana teachings of the Buddha, Avalokita appears as a bodhisattva who participates in many dialogues with the Buddha such as the Heart Sutra. In the vajrayana, Avalokita is a wisdom deity, or yidam. The yidam is a representation of the qualities of the true nature of mind with whom the meditator aligns his or her mind in order to make those qualities manifest. In particular, Avalokiteshvara is taught most frequently in connection with the qualities of loving-kindness and compassion. Tyler Dewar