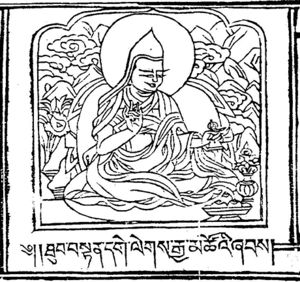 
An important modern master of the Jonang school. He was born in the village of "Bamda," hence the name, near Tsangwa Tratsang (gtsang ba grwa tshang) in the Dzamthang valley of Amdo, Tsangwa being the largest of the three faculties of the large Dzamthang monastery, the present-day main seat of the Jonang school of Tibetan Buddhism. From his childhood days, he received a thorough education in the Jonang tradition. He later traveled to Derge in Kham and became a close student of both the great Jamgön Kongtrul Lodrö Thaye, as well as the famous Dzogchen master Paltrul Rinpoche. Upon his return to Dzamthang, several years later, he received most extensive instructions on the Kalacakra system of the Jonang tradition, and especially on the Six Vajra Yogas perfection process meditations of that system. He wrote extensively on many subjects, but especially on all aspects of Kalacakra practice and theory. These writings are counted among the most extensive and authoritative works on Kalacakra to the present day. But he did not write on Kalacakra or Jonangpa subjects only. He also wrote widely on Prajnaparamita, on various Shangpa Kagyu subjects, on mandala drawing and construction, and his works on the Six Doctrines of Naropa are considered among the best and most detailed theoretical writings which exist on the subject matter. His entire literary output is collected in 22 volumes.