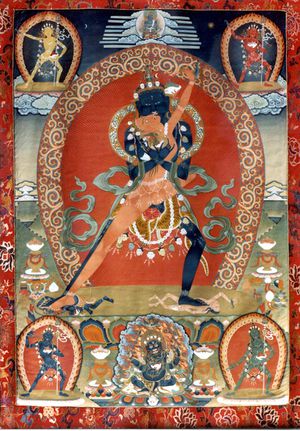 A tantric deity most popular with the "gsar ma" schools of Tibetan Buddhism. He is usually depicted in union with his consort Varjayoginī. He comes in a simple five deity maṇḍala in his two-armed single-faced form and surrounded by four ḍākinīs; as a twelve-armed and four-faced form surrounded by sixty-two deities; as well as in several dozen different many-armed and multiple-faced forms with many retinue figures, some peaceful some wrathful. The three main lineages of Cakrasaṃvara transmission, teachings and practice, which originated with the Indian Mahāsiddhas Luipa, Ghantapada and Krishnacharya, were all transmitted to Tibet and exist to the present day. It's teachings and practices are mainly based on the Śrī-cakrasaṃvara-nāma-mahāyoginī-tantra-rāja, which is however better known as the Śrīherukābhidhāna. [TSD]