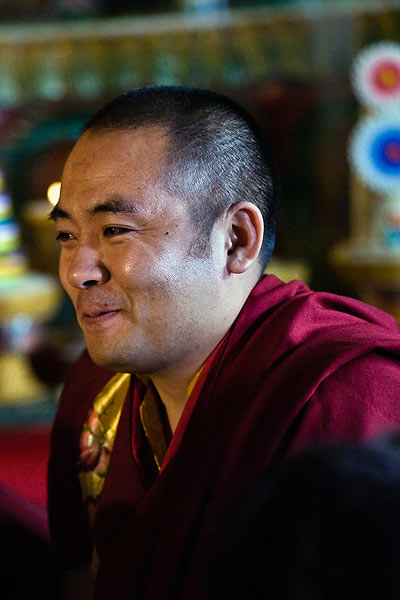 After Nepal, Rinpoche came up to Bir in Northern India where his monastery is based. There, Orgyen Topgyal Rinpoche enthroned him. Neten Chokling Rinpoche was also enthroned by Dzonor Rinpoche at Mindroling Monastery, the seat of H.H. Minling Trichen Rinpoche. H.H. Dilgo Khyentse Rinpoche was also present that time.

Padmakara, the forefather of the hundred accomplished vidyadharas,
Yidam deities, magical manifestations of unchanging Great Bliss,
The assembly of Vajra Guardians and dakinis,
Grant us your true blessing, that we may know your wondrous power!

You who are the prince of scholars and sages,
Holder of the teachings which mature and liberate beings,
The Supreme Vehicle of the Ancient Translation (Kama and Terma),
May your life, bodhichitta and virtuous activity, like the arising moon, be victorious over all!

May the tradition of the Lord of Dharma (the Great Tertön),
Which possesses the seven special direct blessings,
Remain strong and complete until the very end of samsara.
And may the Three Worlds be forever adorned with this spring flower of wondrous virtue!


This was composed to fulfill the wish of the 16th Gyalwa Karmapa.