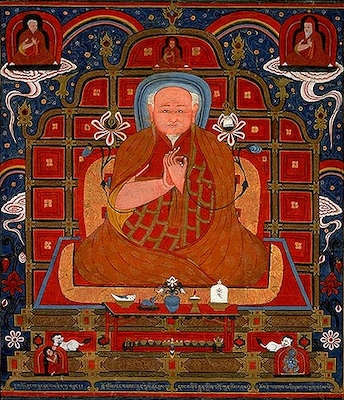 Drogon Chogyal Phagpa (1235-1280 A.D) was the son of Zhangtha, and was the nephew of Sakya Pandita. He gave his first Hevajra teaching when he was eight. Due to this event he was called the Noble one (phags pa). He mastered the inner and outer teachings, Kalachakra and majority of the teachings knowin in Tibet at that time.

The great Mongol emperor Sechen invited him to China where he carried out great works. He ordained thousands of monks each year in China, while also giving many teachings. He also compiled the first Mongol alphabet in response to the king who requested the teachings to be translated and recorded.

Drogon Chogyal Phagpa became by decree of the Mongol emperor the first religious and temporal ruler of Tibet.

Drogon Chogyal Phagpa is one of the Five Superiors of the Sakya Tradition.