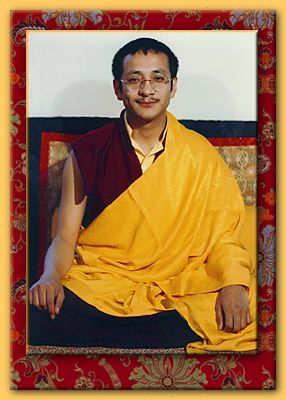 The current Dzogchen Ponlop Rinpoche was born in 1965 at Rumtek Monastery (Dharma Chakra Center) in Sikkim, Northern India and was raised from a young age by His Holiness the 16th Karmapa Rangjung Rikpey Dorje, supreme head of the Kagyu lineage of Tibetan Buddhism. His father was Dhamchö Yongdu, the General Secretary of His Holiness the 16th Gyalwang Karmapa and his mother was Lekshey Drolma, who comes from a family of intellectuals and artists. His Holiness Karmapa prophesized his birth to his parents before he was conceived. Upon his birth, Karmapa immediately recognized him as the seventh in the line of Dzogchen Ponlop incarnations. As a heart son of the Karmapa, he is one of the highest ranking lineage holders of the Karma Kagyu tradition; he was enthroned at Rumtek Monastery in 1968, when His Holiness Karmapa formally empowered and officially proclaimed him as The Seventh Je-ön Ponlop Rinpoche. He is also a highly esteemed Nyingma master who received many of the Nyingma tranmissions from Dilgo Khyentse Rinpoche, Tulku Urgyen Rinpoche, and others.[1]

The Dzogchen Ponlop Rinpoche was one of seven Rinpoches in the first graduating class from Karma Shri Nalanda Institute for Higher Buddhist Studies (KSNI), the shedra of Rumtek Monastery,[2] and is widely recognized of one of the most brilliant scholars of his generation. In addition, he is also an acknowledged meditation master, poet and artist. 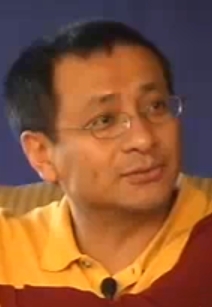 As part of his effort to assist in the integration of computer technology with traditional Tibetan scholarship, Rinpoche founded Nitartha International in 1994. In 1998 he became director of the Kamalashila Institute of Germany, at the request of His Holiness, the Seventeenth Gyalwang Karmapa.

He currently resides in Seattle, USA, where he directs the Nalandabodhi sangha and a yearly shedra program, Nitartha Institute, which takes place in Canada.