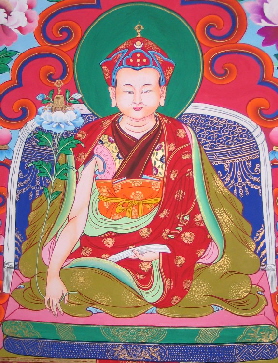 The first Dzogchen Rinpoche was heralded in the prophesies of many great lamas, including those of HH Fifth Dalai Lama and the great treasure revealer Dundul Dorje. He was held to be an incarnation of many masters including the Buddha Ratnasikhin, Guru Rinpoche, Mahasiddha Saraha, the great pandita Vimalamitra's and Je Tsongkhapa. The master himself experienced meditative visions of these previous lives.

Born in 1625 in Riboche near Chamdo, Pema Rinzin was a child of genuine compassion and renunciation. He studied the sutras and tantras with over thirty great spiritual masters, including treasure revealer Tulku Dundul Dorje and Nadak Choki Wangpo, and became highly learned. Most importantly, in his twenty-ninth year, Pema Rinzin met with the Dzogchen master Baka Tulku Rinzin Chokyi Gyatso, who gave him the complete Heart Essence of the Dakini empowerments, transmissions and instructions of the oral lineage.

After that Pema Rinzin lived as an ascetic in many important retreat places, including Guru Rinpoche’s cave at Chimpu in Samye, Mt. Kailais and Balgi Tsari. Enduring terrible hardships, he practised Dzogchen with great fortitude. He actualised the view of trekcho and perfected the power of spontaneous thogal. He became known widely as the Great Siddha Dzogchen Pema Rinzin.

His Holiness the Great Fifth Dalai Lama engaged Pema Rinzin as his meditation teacher and received from him the complete personal instructions of Dzogchen, so that both master’s minds became inextricably united in the dharma. Following this, Pema Rinzin received many prophesies from Guru Rinpoche, and the Fifth Dalai Lama predicted the founding of Dzogchen Monastery.

The prophesies were fulfilled when, at the age of sixty, Pema Rinzin journeyed on-foot to Kham, Eastern Tibet, and in 1685 established Dzogchen monastery Orgyen Samten Choling in the Rudam valley. The king of Dege Sangye Denpa became a patron and temples were constructed. Over a thousand students gathered to receive and practise the teachings that the master gave.

From the countless number of students who practised under Pema Rinzin, most outstanding were the treasure revealer Nyima Trakpa, the First Shechen Rabjam Rinpoche Tenpe Gyaltsen and Dzogchen lineage holder Ponlop Rinpoche Namkha Osel. Each of these masters gradually developed his own teaching tradition and the lineage of clear light Dzogpa Chenpo spread far and wide.

Having greatly benefited the teachings and all beings, Dzogchen Pema Rinzin passed away in 1697 at the age of seventy-two.