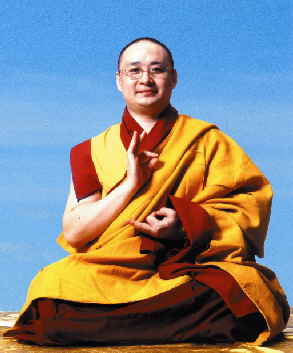 Dzogchen Rinpoche is the throne holder of Dzogchen Monastery and the Director of Shira Sing Buddhist University. He is a Khenpo and studied with many of the old generation of realised Dzogchen masters from an early age. Dzogchen Rinpoche holds a Doctorate degree from the Higher Buddhist University in Beijing, and a seat on the religious advisory board of Dege Prefecture. He has also gained recognition from the Chinese authorities as one of the highest incarnate lamas in Tibet. He published the extensive History of the Dzogchen Lineage in 2004 and currently divides his time between leading classes in Shira Sing College and writing.

Rinpoche was born in the Bare region of lower Amdo in the tiger year, 1974, to Tsering Gyaltsen of the Magyal clan and Dondrup Drolma of the Adro clan, the same clan as that of the Sixth Dzogchen Rinpoche. From an early age Rinpoche possessed great compassion and renunciation. At the age of seven, he witnessed the slaughter of many hundreds of yaks and sheep in his home town. This provided him with the impetus to leave home and live a religious life in Dzogchen Monastery.

In the monastery Rinpoche was brought up lovingly by his uncle Tulku Pema Kalsang Rinpoche and Sogyal, caretaker to Sixth Dzogchen Rinpoche, and he began to learn to read and write. At the age of fifteen Rinpoche moved to Shira Sing Buddhist University, where he took ordination with Great Khenpo Dawa Osel and learnt grammar and poetry. Continuing his studies, Rinpoche received teachings on all the important sutras and tantras from many spiritual tutors, including Great Khenpo Dawa Osel, Minyak Khenpo Tsering Nyima, Gegyal Khen Rinpoche Tubten Namgyal, Geymang Khenpos Wanglo and Wangdu, and Great Minyak Khenpo Zara Chodrak. Great Pandita Pema Tsewang taught him the main scriptural commentary sections of madhyamaka, prajnaparamita and logic, together with the treatises of Mipham Rinpoche. Rinpoche was naturally very intelligent, and at the age of eighteen having mastered a great many teachings, he was appointed as an assistant professor in Shira Sing Buddhist University.

When he was twenty, Rinpoche heard about Great Khenpo Chokyab Rinpoche, an old realised lama of the Serta district. He went to study with the lama and received profound teachings of the Nyingma tradition, including the personal instruction section of Dzogpa Chenpo. Returning to Shira Sing, Rinpoche, now twenty-two years old, he was honoured with the title of Khenpo or Scripture Master and began giving classes on various subjects, including the Middle-Way and Perfection of Wisdom.

With the realised master Dokden Lama, Rinpoche received the complete Dzogchen transmission lineage, the experiential guidance of the Innermost Esoteric Heart Essence. The lama praised him highly saying, ‘I have placed the lineage in our precious father’s hands.’ It was also from this master that Rinpoche took full ordination at twenty-seven. Great refuge Lama Tulku Pema Kalsang Rinpoche and Drukpa Tulku Tupten Nyima bestowed on Rinpoche the entire collection of maturing empowerments of the Nyingma tradition, complete with the liberating guidance and supporting transmissions. In this way Rinpoche became rich in the holy qualities of wisdom, morality and compassion.