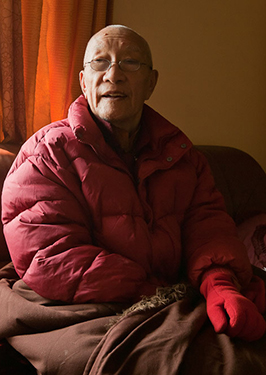 Garje Khamtrul Rinpoche Jamyang Dondrub started his life on December 19, 1928, or, by Tibetan reckoning, in the Earth Dragon year of 2015, in a small village near Ba Chöde Monastery on the banks of the Drichu River in Kham, eastern Tibet. Shortly after his birth, he was brought to Lithang. He spent his first years there in the family home just outside the walls of Lithang Gönchen, the great monastery founded by the third Dalai Lama, Sönam Gyatso.

From a young age, Rinpoche had visions of the Buddha, Guru Rinpoche, Lama Tsongkhapa and others. Though his mother found some of her son’s stories hard to believe, she saw to it that he received a Buddhist education. Thus at the age of four, the young Jamyang Dondrub was taught to read and write and, at the age of six, he entered the religious life at Lithang Monastery.

Then, one day in 1935, a couple of travelers arrived on the outskirts to Lithang. They had come on the advice of the Fifth Dzogchen Rinpoche and Khenpo Ngakchung in search of a child said to be the rebirth of their lama, Tulku Dorje Namgyal of Garje Khamü Monastery. Rinpoche, who was playing with his friends in the field at the time, recognized them. Surprised and delighted the young boy knew not only their names but also that of their mounts, they followed him home to speak to his family. Initially, Rinpoche’s uncle stubbornly refused to speak with Garje Khamü Monastery’s representatives and threatened to upset the proceedings. Fortunately, the abbot of Lithang Monastery intervened and secured his uncle’s cooperation, thus allowing Rinpoche and his mother to accompany the representatives back to Garje, a journey of many days to the northwest.

After passing the traditional battery of tests, such as recognizing the personal effects of his predecessor, Jamyang Dondrub was installed as the rebirth of Dorje Namgyal and began his formal studies. He was to spend the next twenty years studying Buddhist thought and practicing meditation under the guidance of such luminary lamas as Drime Abhan Tulku, Adzom Gyalse Gyurme Dorje, Trakya Palden Lama and Jamyang Khyentse Chokyi Lodro.