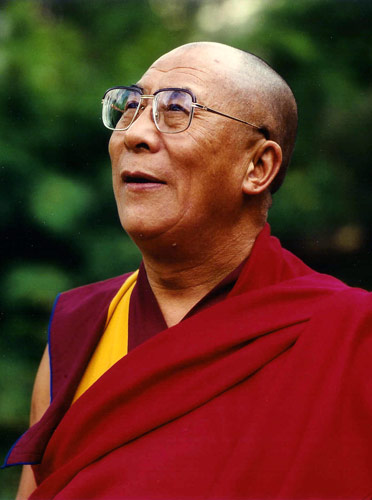 His Holiness the 14th Dalai Lama, Tenzin Gyatso, is the head of state and spiritual leader of the Tibetan people. He was born Lhamo Dhondrub on 6 July 1935, in a small village called Taktser in northeastern Tibet. Born to a peasant family, His Holiness was recognized at the age of two, in accordance with Tibetan tradition, as the reincarnation of his predecessor the 13th Dalai Lama, and thus an incarnation of Avalokitesvara, the Buddha of Compassion.

His Holiness the 14th Dalai Lama, Tenzin Gyatso, is both the head of state and the spiritual leader of Tibet. He was born on 6 July 1935, to a farming family, in a small hamlet located in Taktser, Amdo, northeastern Tibet. At the age of two the child, who was named Lhamo Dhondup at that time was recognized as the reincarnation of the 13th Dalai Lama, Thubten Gyatso. The Dalai Lamas are believed to be manifestations of Avalokiteshvara or Chenrezig, the Bodhisattva of Compassion and patron saint of Tibet. Bodhisattvas are enlightened beings who have postponed their own nirvana and chosen to take rebirth in order to serve humanity.

Education in Tibet His Holiness began his monastic education at the age of six. The curriculum consisted of five major and five minor subjects. The major subjects were logic, Tibetan art and culture, Sanskrit, medicine, and Buddhist philosophy which was further divided into a further five categories: Prajnaparimita, the perfection of wisdom; Madhyamika, the philosophy of the middle Way; Vinaya, the canon of monastic discipline; Abidharma, metaphysics; and Pramana, logic and epistemology. The five minor subjects were poetry, music and drama, astrology, motre and phrasing, and synonyms. At 23 he sat for his final examination in the Jokhang Temple, Lhasa, during the annual Monlam (prayer) Festival in 1959. He passed with honours and was awarded the Geshe Lharampa degree, the highest-level degree equivalent to a doctorate of Buddhist philosophy. Leadership Responsibilities

In 1950 His Holiness was called upon to assume full political power after China's invasion of Tibet in 1949. In 1954, he went to Beijing for peace talks with Mao Zedong and other Chinese leaders, including Deng Xiaoping and Chou Enlai. But finally, in 1959, with the brutal suppression of the Tibetan national uprising in Lhasa by Chinese troops, His Holiness was forced to escape into exile. Since then he has been living in Dharamsala, northern India, the seat of the Tibetan political administration in exile.

Since the Chinese invasion, His Holiness has appealed to the United Nations on the question of Tibet. The General Assembly adopted three resolutions on Tibet in 1959, 1961 and 1965.

Democratisation Process In 1963 His Holiness presented a draft democratic constitution for Tibet that was followed by a number of reforms to democratise our administrative set-up. The new democratic constitution promulgated as a result of this reform was named "The Charter of Tibetans in Exile". The charter enshrines freedom of speech, belief, assembly and movement. It also provides detailed guidelines on the functioning of the Tibetan government with respect to those living in exile.

In 1992 His Holiness issued guidelines for the constitution of a future, free Tibet. He announced that when Tibet becomes free the immediate task would be to set up an interim government whose first responsibility will be to elect a constitutional assembly to frame and adopt Tibet's democratic constitution. On that day His Holiness would transfer all his historical and political authority to the Interim President and live as an ordinary citizen. His Holiness also stated that he hoped that Tibet, comprising of the three traditional provinces of U-Tsang, Amdo and Kham, would be federal and democratic.

In May 1990, the reforms called for by His Holiness saw the realisation of a truly democratic administration in exile for the Tibetan community. The Tibetan Cabinet (Kashag), which till then had been appointed by His Holiness, was dissolved along with the Tenth Assembly of Tibetan People's Deputies (Tibetan parliament in exile). In the same year, exile Tibetans on the Indian sub-continent and in more than 33 other countries elected 46 members to the expanded Eleventh Tibetan Assembly on a one-man one-vote basis. The Assembly, in its turn, elected the new members of the cabinet. In September 2001, a further major step in democratisation was taken when the Tibetan electorate directly elected the Kalon Tripa, the senior-most minister of the Cabinet. The Kalon Tripa in turn appointed his own cabinet who had to be approved by the Tibetan Assembly. In Tibet's long history, this was the first time that the people elected the political leadership of Tibet.

Peace Initiatives In September 1987 His Holiness proposed the Five Point Peace Plan for Tibet as the first step towards a peaceful solution to the worsening situation in Tibet. He envisaged that Tibet would become a sanctuary; a zone of peace at the heart of Asia, where all sentient beings can exist in harmony and the delicate environment can be preserved. China has so far failed to respond positively to the various peace proposals put forward by His Holiness

The Five Point Peace Plan In his address to members of the United States Congress in Washington, D.C. on 21 September 1987, His Holiness proposed the following peace plan, which contains five basic components:

Transformation of the whole of Tibet into a zone of peace. Abandonment of China's population transfer policy that threatens the very existence of the Tibetans as a people. Respect for the Tibetan people's fundamental human rights and democratic freedoms. Restoration and protection of Tibet's natural environment and the abandonment of China's use of Tibet for the production of nuclear weapons and dumping of nuclear waste. Commencement of earnest negotiations on the future status of Tibet and of relations between the Tibetan and Chinese peoples. Strasbourg Proposal In his address to members of the European Parliament in Strasbourg on 15 June 1988, His Holiness made another detailed proposal elaborating on the last point of the Five Point Peace Plan. He proposed talks between the Chinese and Tibetans leading to a self-governing democratic political entity for all three provinces of Tibet. This entity would be in association with the People's Republic of China and the Chinese Government would continue to remain responsible for Tibet's foreign policy and defence.

Universal Recognition His Holiness the Dalai Lama is a man of peace. In 1989 he was awarded the Nobel Peace Prize for his non-violent struggle for the liberation of Tibet. He has consistently advocated policies of non-violence, even in the face of extreme aggression. He also became the first Nobel Laureate to be recognized for his concern for global environmental problems.

His Holiness has travelled to more than 62 countries spanning 6 continents. He has met with presidents, prime ministers and crowned rulers of major nations. He has held dialogues with the heads of different religions and many well-known scientists.

Since 1959 His Holiness has received over 84 awards, honorary doctorates, prizes, etc., in recognition of his message of peace, non-violence, inter-religious understanding, universal responsibility and compassion. His Holiness has also authored more than 72 books.

His Holiness describes himself as a simple Buddhist monk.

Articles about and by His Holiness on the official website of the Tibetan Government in exile.