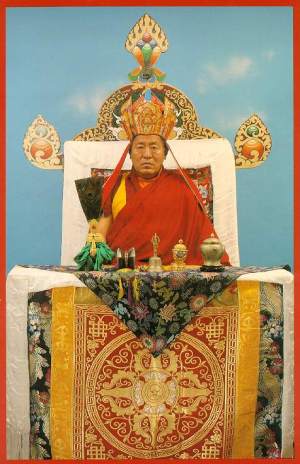 Choje Khen Rinpoche Jigme Phuntsok Jungne (1933-2004): Was born in the year of the Water-Bird (1933) in Lhonor area of Sertha to Palden and his wife Yutso. He started his education around the age of six. His father passed away when he was nine.

When he was 14 he was ordained as a monk by Khenpo Sonam Rinchen and when he was 16 he went to Zachukha to study under Thoga Rinpoche. At the age of 24 he returned to his hometown Lhonor and began teaching at the Lhonor Monastery.

In 1980 he founded the Larung Gar Buddhist Institute near Serthar. When the 10th Panchen Lama visited Serthar in 1985 the Khenpo had an audience.

In 1987 the Khenpo traveled to Wutaishan (sacred Buddhist mountain site in Shanxi Province) accompanied by several thousand of his disciples. In 1989 at the request of the Panchen Lama the Khenpo went to teach at the Tibetan Buddhist Institute in Beijing.

the highly-respected Tibetan Buddhist teacher and founder of Larung Gar Buddhist Institute in eastern Tibet, near the town of Serthar (Ch: Seda) in present-day Sichuan Province, passed away at approximately 9:40 am on January 7, 2004, at a hospital in Chengdu. He was 70.

Khenpo Jigme Phuntsok had become a well-known Buddhist figure not just in Tibet and among the Tibetan people, but also throughout China and the Chinese-speaking Buddhist world. The Buddhist Institute that he founded in Larung Gar, near Serthar, in 1980 with fewer than 100 disciples expanded and by 2002 it had over 8,000 disciples, including a sizable Chinese population. He had also traveled extensively within China, giving Buddhist teachings in Beijing, Ningbo, Jizu Shan, Guanzhou, and Shenzhen.

Khenpo Jigme Phuntsok was known for his scholarship. He was the first monk in modern Tibet who succeeded in building a major, successful monastic teaching center. His religious charisma was matched by an ability to work with authorities and to push them to their limits.

1933. Khenpo Jigme Phuntsok was born the first son of a nomadic family in March in the Dzume Chola planes in present day Serthar near [[Drupchen Monastery]].

1947. Formally enters a monastery at the age of fourteen, receiving preliminary vows from the renowned scholar Khenpo Sonam Richen of [[Dragzong Monastery]] in Nyarong, eastern Tibet .

1951. At the age of eighteen, he begins six years of intensive study and solitary mediation retreats with Thubten Choepel Rinpoche at [[Cangma Monastery]] in Dzachukha region of eastern Tibet.

1949. China's invasion of Tibet begins in and around Khenpo Jigme Phuntsok's home area.

1955. At twenty two, he became a fully ordained monk maintaining over 250 vows.

1957. At twenty four, Khenpo returned to his home monastery of Nubzor, where Terton Sogyal had passed away, to resume his spiritual and administrative role.

1959. 14th Dalai Lama flees Tibet and begins exodus of the majority of learned Buddhist teachers from across the Tibetan plateau. Khenpo Jigme Phuntsok remains in Kham and establishes mediation retreat centers in mountains near Nubzor and continues to give philosophical teachings and meditation instructions at various monasteries.

1960-1980. Khenpo Jigme Phuntsok evades the People's Liberation Army, the Red Guard and Chinese authorities by wandering as a goat herder and nomad in the remote valleys of Serthar in eastern Tibet. During these years, he continued to practice mediation, write commentaries on Buddhist philosophical texts, as well as informally transmit teachings to students. In Kham, stories abound today of Khenpo Jigme Phuntsok's miraculous abilities to evade capture during this period.

1980. In accordance with prophecy, Khenpo Jigme Phuntsok went with less than a dozen students to a desolate valley near Serthar and built simple earthen wall meditation huts for mediation retreats. This became [[Larung Gar Buddhist Academy]].

1981. Begins to write his autobiography at the request of his close disciples. More than a hundred students live around Khenpo Jigme Phuntsok's mud hut.

1983. Khenpo Jigme Phuntsok experiences his first problems with his heart at the age of 50. Continues to teach extensively at Larung Gar as the number of students building permenent earthen homes increases.

1982-1986. Numbers of students coming to Larung Gar to temporarily reside to study and receive teachings begins to increase by the thousands. By 1986, more than six thousand monks and nuns from all different regions of Tibet are attending the ecumenical teachings of Khenpo Jigme Phuntsok which included his commentary on texts of Padmasambhava, Sakya Pandita, Naropa, and Je Tsong Khapa. Khenpo Jigme Phuntsok travels in throughout eastern Tibet teaching.

1987. Khenpo Jigme Phuntsok makes a pilgrimage with thousands of students following to Wu Tai Shan, the Five Peaked Mountain in China, as well as Emishan Peak.

1988. Khenpo Jigme Phuntsok returns to Beijing to teach from Nyingma, Kagyu, Sakya and Gelugpa texts at the Buddhist Higher Academy at the request of the Panchen Lama.

1988. Khenpo Jigme Phuntsok visits holy places in and around Lhasa and Shigatse at the invitation of the Panchen Lama.

1989. In June, Khenpo Jigme Phuntsok travels to Nepal on pilgrimage and makes arrangements to travel to India.

1991. At Larung Gar, nearly 150 students had graduated since 1980 with the degree of "Khenpo" under Khenpo Jigme Phuntsok's intensive Buddhist curriculum of study, meditation, and debate. Within the next ten years, that number swells to 600. Thus, Larung Gar khenpos are able to return to their local monasteries throughout Tibet and China to teach the next generation of students. At Larung Gar, simultaneous translation into Chinese of Khenpo Jigme Phuntsok's teachings by bilingual teachers if fully functioning, as the number of Chinese students from China, Singapore, Hong Kong and elsewhere continues to grow.

1993. Khenpo Jigme Phuntsok teaches and gives empowerments at the invitation of Buddhist centers in Singapore, Malaysia, France and the USA.

2001. On a scale not witnessed since the Cultural Revolution, massive demolition of monastic homes and large scale eviction of monks and nuns begins in July. All Chinese students are evicted, overseen by Public Security Bureau and People's Liberation Army. Police occupy the housing facility formerly used by Chinese students.

2001. During the demolition, Khenpo Jigpun's health deteriorates and moves to hospitals in Chengdu for medical care. His movements are under constant surveillance by Chinese authorities. At Larung Gar, the curriculum is severely disrupted from the demolition, eviction and Khenpo Jigme Phuntsok's absence, although teachings by junior teachers continue.