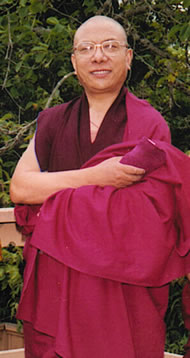 Khenpo Lungrik Senge Rinpoche was born in Eastern Tibet in 1950. He was ordained at the age of sixteen at the Sakya Centre in India and was among the first group of students to enter the Sakya College where he later became a teacher there instructing His Holiness Sakya Trizin's sons, Ratna Vajra Rinpoche and Gyana Vajra Rinpoche. He also taught Her Eminence Jetsun Chimey Luding's son, His Eminence Luding Khen Rinpoche (Junior).

Some of Khenpo Lungrik's teachers have been His Holiness Sakya Trizin, His Eminence Luding Khen Rinpoche (Senior), and the Venerable Khenpo Appey Rinpoche.

Khenpo Lungrik has had all the initiations of the Drubtab Kundu which consists of over 600 initiations and the Gyude Kuntu which consist of over 300 initiations. He received the complete transmissions of Kunkyen Kabum and the Yogini Text (6 volumes) as well as Lamdre (common and uncommon) teachings many times.

Khenpro Lungrik has also written a book on the Fire Puja of Avalokiteshvara. He is a very devoted and accomplished practitioner and learned scholar exhibiting warmth, humility and a great sense of humor.