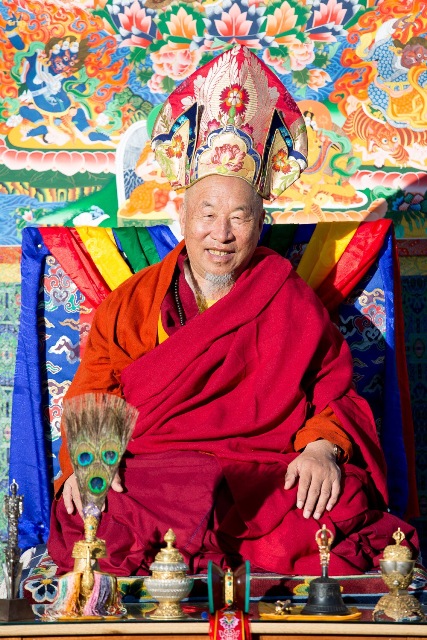 Khenchen Tashi Dhondrup was born in 1943 in Kham Minyak, Tibet to a nomadic family. When he was eight years old, he began to learn to read and write, as well as perform ritual practices, from his uncle Tsara Tobden, who was the cousin of Tsara Dharmakirti Rinpoche. He formally entered a monastery at age 13, and was ordained by Gyaru Khenpo Chogye. Although the cultural revolution took place soon after, Khenchen Tashi kept his monastic discipline and vows as carefully as one protects their own eyes. In his early twenties, he became a formal student of Tsara Dharmakirti Rinpoche, receiving from him a complete lineage of sutra, tantra and upadesha instructions in all four schools of Vajrayana Buddhism. Especially, he received instructions and training in the Nyingma Longchen Nyingthig lineage. He relied closely upon Tsara Dharmakirti as his root Lama for nearly forty years. Additionally, he became a close student of the famous Dzogchen yogi Tromgye Arig, who was also the root Lama of the renowned scholar Khenpo Akhyuk (the founder of Yachen, the second largest Buddhist University and place of meditative accomplishment in the world); the great Dzogchen yogi Nyagrong Anyen; Alak Zenkar Rinpoche, the only accepted reincarnation of Jigme Lingpa; and Tulku Nyima Gyaltsen, who is the speech reincarnation of Khenpo Ngagchung. From these and other renowned yogis and scholars, he received empowerments, transmissions and upadesha instructions in the Nyingma tradition and gained the quality of realization from his listening and meditation. Khenchen Tashi has been turning the wheel of the Secret Mantrayana formally throughout Tibet since 1984. He is currently the head scholar at Do Kham Shedrup Ling in Kham Minyak, seat of Tsara Dharmakirti Rinpoche.