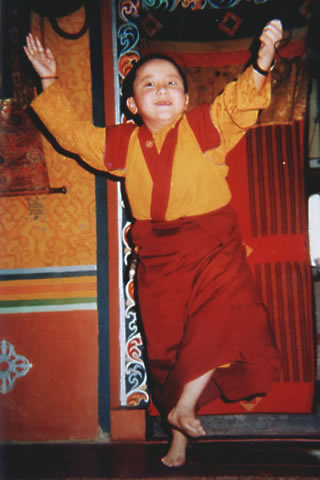 Khyentse Yangsi Rinpoche is the incarnation of Dilgo Khyentse Rinpoche who passed away in 1991 at the age of 81.

Khyentse Yangsi Rinpoche was born in Nepal on June 30,1993. Trulshik Rinpoche, who resides in the Everest region of Nepal, was Dilgo Khyentse Rinpoche's most senior and accomplished disciple. When Khyentse Rinpoche passed away, his close students requested him to find his incarnation. Trulshik Rinpoche had numerous dreams and visions that clearly indicated the identity of the incarnation. The visions included a four-line poem revealing the year of the child’s birth, the names of his parents, and the place where he could be found

In the spring of 1995, he sent a letter to Rabjam Rinpoche with the details of the verse which, when it was decoded, revealed that the father was Tsikey Chogling Rinpoche Mingyur Dewai Dorje, the third embodiment of Chogyur Dechen Lingpa, (himself the son of Tulku Ugyen Rinpoche), and that the mother was Dechen Paldron. Their son, born on Guru Padmasambhava's birthday, the 10th day of the fifth month of the bird year, was the "unmistaken incarnation of Tashi Paljor" (one of Dilgo Khyentse Rinpoche’s names). His Holiness the Dalai Lama confirmed that this child was the tulku or reincarnation of Dilgo Khyentse Rinpoche.

In Dec.1995, at the sacred Maratika Cave in Nepal, Trulshik Rinpoche performed the ceremony of offering a name (Ugyen Tenzin Jigme Lhundrup), and robes to the young tulku. His actual enthronement took place at Shechen Tennyi Dargyeling Monastery in Nepal in December 1996 and was attended by thousands of students from all over the world.

Khyentse Yangsi Rinpoche is presently being tutored in Bhutan where he is receiving extensive training in reading, philosophy, writing and meditation. He studies with three other young monks and English is included in their curriculum. Every year he travels to Nepal for the Tibetan New Year to visit his family and partake in the annual ceremonies at Shechen Monastery.