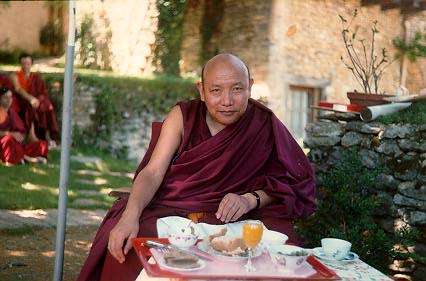 Kyabjé Trulshik Shatrul Ngawang Chokyi Lodro Rinpoche (1923-2011) was one of the most revered living masters of Tibetan Buddhism, and without doubt among the most important lamas of our time. He was the heart son of both Kyabjé Dudjom Rinpoche and Kyabjé Dilgo Khyentse Rinpoche, and he was one of the teachers of His Holiness the Dalai Lama, to whom he regularly gave rare teachings and transmissions, in particular from the Nyingma and Dzogchen tradition.

He was born at Yardrok Taklung in Central Tibet in 1923.‎‎ He was recognized in early childhood as the immediate re-embodiment of Terton Do-ngak Lingpa (Kunzang Thongdrol Dorje) a famous discoverer of hidden treasures and was also considered as being the manifestation of Lord Buddha’s disciple Ananda, as well as of Aryadeva, Thonmi Sambhota, the abbot Shantarakshita, the translator Vairotsana and Rechung Dorje Trakpa.

He received his early education from his predecessor's foremost disciple, Ngawang Tendzin Norbu (1867-1942), who was known as the Buddha of Dza Rongphuk after his place of retreat and the monastery that he established on the northern slopes of Mount Everest. After Ngawang Tendzin Norbu passed away, Trulshik Rinpoche became the abbot of the monastic community, and following the tragic events of 1959 moved with his followers to safe haven in the valleys to the south of the Mount Everest area, among the Sherpa people of northeastern Nepal. Thupten Chöling, the monastery that he founded there, is today renowned as a foremost center for the monastic traditions of the Nyingma School of Tibetan Buddhism. Since he came out of Tibet, Rinpoche has ordained nearly ten thousand monks and nuns.

Trulshik Rinpoche was also the unique heir to some of Tibet's rarer traditions, for instance that of the "Pacification of Suffering" (Tib. Shyijé), first introduced in Tibet during the 11th century by the Indian yogin Padampa Sangye. As the embodiment of a line of treasure-discoverers, he continued his predecessor's teachings, especially those in relations to the great master Padmasambhava and the meditational teachings of the Great Perfection or Dzogchen. Trulshik Rinpoche's unusually clear and spontaneous style of teaching was reflected in his accomplishments as a poet and master of all aspects of the monastic arts. His direction of the annual Mani Rimdu festival of masked dance-drama is documented in Richard Kohn's film Lord of the Dance, Destroyer of Illusion (1986), the title of which is in part derived from his name, Trulshik Rinpoche, "the Precious Destroyer of Illusion." After the passing of Kyabje Penor Rinpoche, Trulshik Rinpoche accepted the position of Head of the Nyingmapa School. He passed away in his new monastery in Sitapaila above Kathmandu on September 2nd 2011.

The following story was told by HH Drukchen Rinpoche:
Kyabje Trulshik Ngawang Chokyi Lodro was born in 1923, in Yardrok Taklung, in central Tibet. He was recognized as a youth to be the reincarnation of Trulshik Dongak Lingpa. His first master was Dzatrul Dorje Chang, who was one of the three main disciples of Trulshik Dongak Lingpa. One day, Dzatrul Dorje Chang, after the passing away of his guru, witnessed two flying sparks which he perceived to be coming from the Copper Colored Mountain. One landed in a village near the seat of his master and the other one landed in his very own lap. The obvious meaning to him was that there would be two incarnations of Trulshik Dongak Lingpa. One would be found in that village and the other would be found by him and would be under his care. This is what transpired. The spark in the village became extinguished after only a short time, unlike the spark that came to him. Later, he understood that this was a foreshadowing that indicated that the incarnation in the village would not live long, because that is how things took place. Whereas, the incarnation which came to his care, that of Trulshik Rinpoche, had a long life, indicated by the bright, long-lasting light of the direct message from the Copper Colored Mountain. Indeed, this message was pure joy, corresponding to the pure joy of the living Trulshik, who is still with us. Kyabje Trulshik approached the greatest masters of his time and received a complete traditional education. Kyabje Trulshik stayed with his disciples in a remote place to the south of Everest. He is still spending most of his time in retreat there at Thubten Dongak Chöling.

Prayer for the Long Life of Trulshik Rinpoche

Lord who possesses the treasure of the essential realization of the vast expanse—
The traditions of the Buddhadharma in general and especially the profound secret mantra of the Ancient Translations school—
And holder of the vinaya discipline, Gyurmé Ngawang Chökyi Lodrö,
May your life be forever firm, and may your enlightened activity be spontaneously accomplished!
This carries the exceptional blessing of vajra speech, being the words of the supreme all-knowing vajradhara and lord of refuge, His Holiness the Dalai Lama.