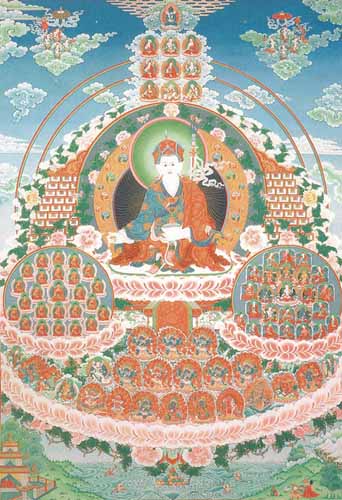 A Short Introduction of the Dudjom Tersar Lineage by Yeshe Thaye

In general, the "Lineage" of a "Tersar" tradition comes from those new "treasures" (termas) of an individual terton, and should include the initiations (wang), scriptural transmissions (lung), and oral teachings (tri) of all the important practices and sadhanas of that particular tradition. Such are the cases with the "Chokling Tersar" and the "Dudjom Tersar" Hence, it is not necessary to include all the writings of the Terton himself (except those related commentaries on those practices). For example, the 25 volumes of Kyabje Dudjom Rinpoche's Collected Works (Sungbum) include both his Tersar as well as his other writings.


The "Dudjom Tersar" as a Lineage forms a whole system by itself, and thus it does not include the works or termas of other Masters. However, there are cases that the works and termas of other great Masters are also included simply because of the realizations of the terton himself, such as Kyabje Dudjom Rinpoche, that he felt it to be more beneficial to all sentient beings by either having some of the long termas of other tertons to be condensed, or by elaborating on some of the more concise termas of other tertons, or both. In any case, the terton himself had done so with a pure intention to benefit all others through his own realizations. For example, there are two important practices on the Khandro Thugthig which was written by Kyabje Chadral Rinpoche that has been included in the Vol.16 of the Dudjom Sungbum by Kyabje Dudjom Rinpoche himself. Kyabje Dudjom Rinpoche had done so when he was still in Lhasa, as he thought this to be most appropriate and beneficial to all sentient beings.

One important thing that differentiates the important works of these great Masters, as compared with the commentaries on both sutras and tantras by other teachers, is the fact that these works are the true realizations of these great Masters who had truly experienced the Dharmata, in order that these works will have the blessings and the continuity of the Lineage all through its Lineage Holders. Kyabje Chadral Rinpoche was being appointed by Kyabje Dudjom Rinpoche as his principal Doctrine-Holder (Chodak) of the "Dudjom Tersar" lineage. (Please refer to the letter written by Kyabje Dudjom Rinpoche in appointing Kyabje Chadral Rinpoche as his Vajra Regent, as recorded in the life story of Kyabje Chadral Rinpoche.)

Here in the "Dudjom Tersar" there is a cycle of "Khandro Nyingthig" discovered by Dudjom Lingpa, while there is another cycle of "Khandro Thugthig" discovered by Kyabje Dudjom Jigdral Yeshe Dorje. Then, there are two other two cycles of Dorje Phurba, namely: (i) The "Thugdrub Sangwai Gyachan" cycle; and (ii) The "Thugdrub Yeshe Nyima" cycle, both of which are included in the "Khandro Nyingthig" cycle of Dudjom Lingpa. At the same time, there is the cycle of "Namchag Pudri" revealed by Dudjom Lingpa, and the cycle of "Pudri Rekpung" revealed by Dudjom Jigdral Yeshe Dorje, both are of the yidam Dorje Phurba.

Prayer for the Preservation of the Dudjom Lineage
Padmasambhava's tradition is the Early Translation Great Perfection School and
Dudjom Lingpa is the chariot of the essential true meaning.
May his profound treasure doctrine be preserved until the end of cyclic existence,
Without sinking, through study and practice.

It was predicted by Urgyen Dechen Lingpa that "in the future in Tibet, on the east of the Nine-Peaked Mountain, in the sacred Buddhafield of the self-originated Vajravarahi, there will be an emanation of Drogben, of royal lineage, named Jnana. His beneficial activities are in accord with the Vajrayana although he conducts himself differently, unexpectedly, as a little boy with astonishing intelligence. He will either discover new Terma or preserve the old Terma. Whoever has connections with him will be taken to Ngayab Ling (Zangdok Palri)."

The following 23 pages are in this category, out of 23 total.