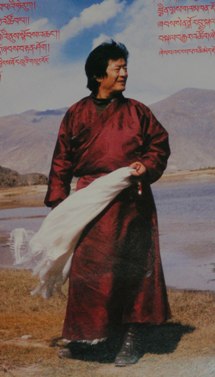 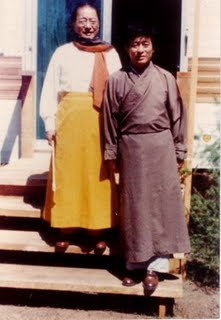 Kyabje Dungsay Thinley Norbu Rinpoche, who is himself a great Nyingma scholar and master like his father. This son, the Dudjom lineage's heir, is an incarnation of the Longchen Rabjam, one of the great Nyingma scholars, commentators and meditation masters. He is also the incarnation of Drimey Ozer, one of Dudjom Lingpa's children. In Tibet, he underwent training for over nine years at the Mindrolling Monastery, the most prestigious Nyingma monastery. He also studied with numerous great masters, including His own father Dudjom Rinpoche who became the supreme head of the Nyingma Lineage. He is also the father of Dzongsar Jamyang Khyentse Rinpoche III. In his youth, Thinley Norbu Rinpoche studied for nine years at Mindrolling monastery and received many teachings from many great saints throughout Tibet, besides his own father. He is now in his sixties and is residing in New York. He is also the author of some notable books.