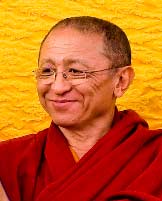 Rinpoche's video in which he speaks about online learning. See/click > [1]

In the seventh lunar month of 1951, Chökyi Nyima Rinpoche was born into the Tsangsar family as the first-born son of Tulku Urgyen Rinpoche whose family has, for many generations, held the now rare Barom Kagyü lineage. At 18 months of age, Chökyi Nyima - whose name means Sun of the Dharma - was recognized as the seventh incarnation of the Drikung Kagyü Lama, Gar Drubchen, a Tibetan siddha and spiritual emanation of Nagarjuna, the second-century Indian Buddhist philosopher. Soon after, he was enthroned at his predecessor's monastery, Drong Gon Tubten Dargye Ling Monastery in Nakchukha, Central Tibet where he resumed his role as Dharma Master to 500 monks.

Shortly before the Chinese invasion of Tibet in 1959, Chökyi Nyima migrated with his parents and younger brother, Tsikey Chokling Rinpoche, to Gangtok, Sikkim. During his younger years, he was enrolled at the Young Lamas' School in Dalhousie, India. At the age of 13, he entered Rumtek, seat of the Kagyü School of Tibetan Buddhism, and spent the next eleven years studying the Karma Kagyü, Drikung Kagyü, and Nyingma traditions under the guidance of such eminent masters as H.H. the 16th Gyalwang Karmapa, H.H. Dilgo Khyentse Rinpoche, and Tulku Urgyen Rinpoche. His studies included such philosophical treatises as Vasubhandu's Abhidharma Kosha, the Five Texts of Maitreya, Dharmakirti's Pramanavartika, Shantideva's Bodhisattva-caryavatara, and Chandrakirti's Madhyamaka Avatara. At a very early age, Tulku Chökyi Nyima achieved the degree of Khenpo.

In 1974, Tulku Chökyi Nyima left Rumtek, where he had been personal aide to the Karmapa, and joined his father and younger brother, Chokling Rinpoche, in Boudhanath, Nepal where, at the command of the 16th Karmapa, they established Ka-Nying Shedrub Ling Monastery close to the Great Stupa Jarung Khashor. After its completion in 1976, he was instructed by the Karmapa to become its 25-year-old abbot. His Holiness also advised Tulku Chökyi Nyima to turn his efforts towards instructing Western practitioners. To fulfill this directive, Rinpoche honed his English language skills and began to offer weekend teachings to the Western travelers.

In 1980, Chökyi Nyima Rinpoche and his father, Tulku Urgyen, embarked on a tour of Europe, the United States, and Southeast Asia where they gave Dzogchen and Mahamudra teachings and empowerments to numerous people.

Rinpoche has a good command of the English language, and has been instructing a growing number of Western students in meditation practice since 1977. When his busy schedule allows, Rinpoche opens his doors and gives weekend teachings to interested Westerner travelers, and each fall conducts an English-translated Dharma Seminar.