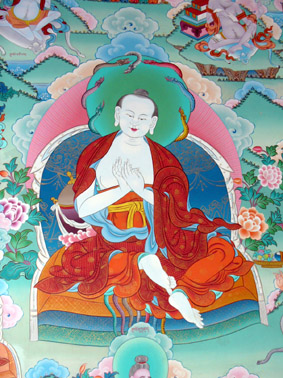 Acharya Nagarjuna (slob dpon klu sgrub). A great Indian master of philosophy. He was named "Naga Master" because he taught the beings in the naga world and returned with the extensive version of Prajnaparamita left in their safe keeping. [RY]

klu grub - Nagarjuna. An Indian master of philosophy and a tantric sid dha. One of the Eight Vidyadharas; receiver of the tantras of Lotus Speech such as Supreme Steed Display. He is said to have taken birth in the southern part of India around four hundred years after the Buddha's nirvana. Having received ordination at Nalanda Monastery, he later acted as preceptor for the monks. He knew alchemy, stayed alive for six hundred years and transformed ordinary materials into gold in order to sustain the sangha. At Bodhgaya he erected pillars and stone walls to protect the Bodhi Tree and constructed 108 stupas. From the realm of the nagas he brought back the extensive Prajnaparamita scriptures (for example the 'The Perfection of Wisdom in 25,000 Lines {or, Verses}). He was the life pillar for the Mahayana, but specifically he was a major exponent of the Unexcelled Vehicle of Vajrayana. Having attained realization of Hayagriva, he transmitted the lineage to Padmasambhava [RY]