The 4th Gyalwang Drukpa. One of the greatest and most famous accomplished masters, scholars and historians of Tibet. His collected works comprise 24 volumes. For an overview of his works, see the index of the Pema Karpo Sungbum. 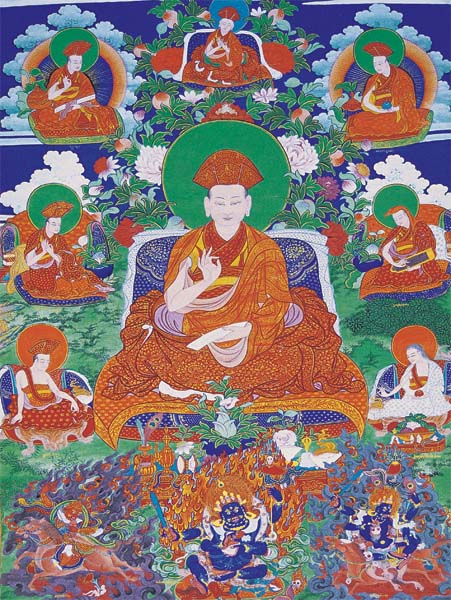 Shortly after his birth, Pema Karpo, the 4th Gyalwang Drukpa, was heard by many chanting the Six-Syllable Mantra seven times, and therefore, as a child, he was also known as "Ah-Om-Mani-Pa", i.e. the child chanting the Six-Syllable Mantra. Pema Karpo was widely known as "Kunkhyen", meaning "the All-Knowing" or "the Omniscient One". He was the most famous and learned of all the Gyalwang Drukpas. During his lifetime, he was known as the grand lama amongst all grand lamas, and was a teacher to many lamas and disciples all over Tibet. His Holiness the 5th Dalai Lama truly admired Pema Karpo for his knowledge and understanding of the Truth.

Pema Karpo contributed 24 volumes of collected works on Tibetan Buddhist philosophy, logic, literature, history and astrology, which have been studied by all sects and traditions to this day. He constructed the monastery of Druk Sangag Choling (The Dharma Garden of Secret Mantrayana) at Jar in southern Tibet, and transferred the seat of the Drukpa Order to this place.

This omniscient master was the first Gyalwang Drukpa to concoct the famous enlightenment pill known as Ja-Tsukma, utilizing esoteric ingredients offered by the dakinis. Before passing away, Pema Karpo promised that he would have two incarnations to propagate the spiritual teachings. In accordance with this prophecy, two incarnations were discovered.
(from : http://www.drukpa.org/)