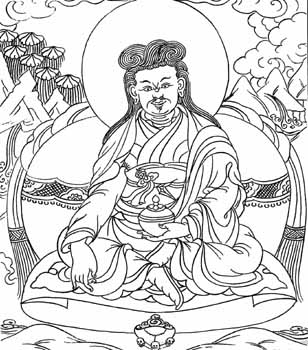 Nyang Ral Nyima Özer (nyang ral nyi ma 'od zer). (1124-1192). In the district of Lhodrag situated to the south of Samye in Central Tibet, a child was born to Nyangton Chokyi Khorlo, a renowned Nyingma yogi, and his wife Lady Yeshe Dron. The child was named Nyima Özer, 'Beam of Sunlight,' an extraordinary being who possessed eight marvellous signs including three moles in the shapes of the syllables om ah hung on his forehead, throat and heart center. After being concealed at home until the age of twelve, unknown to other people, he was taken to a fair arranged by his uncle. At the fair he outshone everyone in the horse race and when seated upon a small throne by his uncle, Nyima Özer expounded bodhichitta, inspiring deep faith in the whole gathering. Because of the twelve year old long hair that was wrapped around his head to hide his ushnika and the om in his forehead, he was given the name Lord Nyang Ral, the Braided Master of Nyang. To the age of twenty-five he studied the prevalent tantric systems of Nyingma and Shijey with many great masters. Following directions given to him by Padmasambhava in person, Nyima Özer went to the cave named Imprint of the Raksha's Claw and to Pearl Crystal Cave at Junipher Ridge where he received empowerment and blessings from both Padmasambhava and Yeshe Tsogyal. During the following years, Nyima Özer revealed an incredible amount of terma treasures. Without propagating a single of these teachings, he kept them secret and remained in retreat at Samye Chimphu for six years. During the retreat, Padmasambhava appeared for seven days and bestowed upon Nyima Özer whichever profound instruction he was requested. Finally, Padmasambhava dissolved into Nyima Özer's heart, producing an experience of bliss, clarity and nonthought which lasted for six months. At another occasion, Yeshe Tsogyal commanded him to go to Lhodrak and establish a temple there for the benefit of beings. Later Nyang Ral Nyima Özer went to Lhodrak where innumerable disciples gradually gathered around him. Due to the tremendous impact of the terma treasures he revealed, Nyima Özer is considered the first of Five Terton Kings. 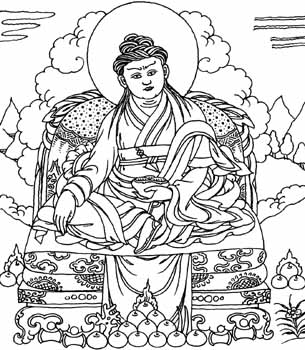 Nyang Ral Nyima Özer (nyang ral nyi ma 'od zer) (1124-1192). The first of the Five Terton Kings and a reincarnation of King Trisong Deutsen. Several of his revealed treasures are included in the Rinchen Terdzo, among which the most well known is the Kagye Deshek Dupa, a cycle of teachings focusing on the Eight Sadhana Teachings, and the biography of Guru Rinpoche called Sanglingma, now published as The Lotus-born. Nyang Ral means 'Braided one from Nyang,' and Nyima Özer means 'Ray of sun light.'