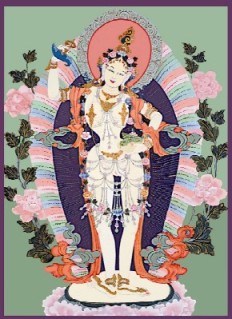 The different versions of her biography give varying details about her place of birth, the names of her parents and so forth. In his Ocean of Wondrous Sayings to Delight the Learned Ones, Guru Tashi Tobgyal states that her father's name was Namkha Yeshe of the Kharchen clan and that she was born in Drongmochey of Drak. At first she was one of King Trisong Deutsen's queens but later was given to Padmasambhava to be his spiritual consort.
During the empowerment of Assemblage of Sugatas, her initiation flower fell on the mandala of Kilaya. Through this practice she became able to tame evil spirits and revive the dead. She was the chief compiler of all the inconceivable teachings given by the great master Padmasambhava. Having remained in Tibet for two hundred years, she departed for the celestial realm of the Glorious Copper Colored Mountain, without leaving a corpse behind.
In The Precious Garland of Lapis Lazuli, Jamgön Kongtrül says, "Yeshe Tsogyal was a direct incarnation of Dhatvishvari Vajra Yogini in the form of a woman. She served Padmasambhava perfectly in that life, engaged in sadhana practice with incredible perseverance and attained a level equal to Padmasambhava himself, the 'continuity adorned with inexhaustible body, speech, mind, qualities, and activities.' Her kindness to the land of Tibet surpasses the imagination and her compassionate activity which is no different from Padmasambhava's continues unceasingly."

The dakini, Yeshe Tsogyal, wrote down and hid many of Padmasambhava’s teachings, including the Lamrim Yeshe Nyingpo. In his Ocean of Blessings, Jamgön Kongtrül says, "Yeshe Tsogyal appeared as an emanation of Dhatvishvari Vajra Yogini and was in essence not different from the consorts of the five buddhas. In the dharmakaya aspect she is known as Samantabhadri or Prajnaparamita; in the sambhogakaya level she manifests in the form of the great consort Dhatvishvari; and therefrom she displays an inconceivable number of nirmanakayas, appearing in whichever way is necessary to influence whoever needs. In the pure lands she appears in the form of Sarasvati, the noble Goddess of Eloquence, and shows the skillful means for generating the light of wisdom in all aspects of knowledge, both the outer and inner levels of philosophy. In the presence of Buddha Shakyamuni, she emanated in the form of Ganga Devi and acted as the custodian of the treasury of the Mahayana teachings. In this snowy land (of Tibet) she took rebirth as a qualified dakini into the family line of the Kharchen clan and became a consort accepted by Guru Rinpoche. By the power of her immense training, she accomplished perfect recall. Traversing the secret path of Vajrayana, right to the letter, she achieved the supreme vajra abode of the twelfth bhumi. Perfecting the great power of realization of the natural Great Perfection, she arrived at the stage at the end of the four visions. Acting as the compiler of all Guru Rinpoche’s words, she visited everywhere in the central and surrounding lands of Tibet and concealed innumerable major and minor termas. At present she resides in the indestructible form of the rainbow body in the Palace of Lotus Light on (the continent of) Chamara where she is indivisible from the ‘never-ending adornment wheels’ of Guru Rinpoche’s body, speech, mind, qualities, and activities, pervading as far as the reaches of space to benefit beings for as long as samsara exists." RY