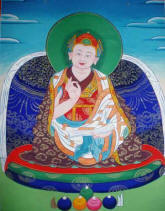 Rigzin Palden Tashi (1688-1743) - Born into the rLang family, one of the four ancient Tibetan families. He was trained in both the Nying-ma and Gelug Buddhist schools. In his 20s, he traveled to central Tibet, where he studied his Nying-ma practice. After completing his spiritual education and practice in Mendro Ling and Kham Srinmozong, he returned to Rebkong and became a great ambassador for the Ngakpa tradition. He traveled during the period 1727-1742, giving teachings to many lay people. He eventually formed the Great Group of Rebkong Ngakpa, known as Rebkong Ngak-Mang. Through his dedication, thousands of Ngakpa & Ngakma came to Amdo to settle, building hundreds of homes. His followers referred to him as the King of the Ngakpa tradition.

Rigdzin Kachupa Palden Tashi (rig 'dzin bka' bcu pa dpal ldan bkra shis): this master from Rekong traveled to Central Tibet and became a Geshe at Drepung Monastery. He then embraced the Nyingmapa Tradition at Mindroling Monastery. He also became the disciple of Terchen Nyima Drakpa and of his son Gyalse Orgyen Tendzin from whom he received the complete transmission of Nyima Drakpa's Termas. He then returned to Amdo where he taught these widely. (See GC, vol.4, p. 444, and RO, p.615). Among the descendants of Palden Tashi, appears the famed Gedun Chöpel (dge 'dun chos 'phel, 1905-1951). See RO p.647. [MR-ShabkarNotes]