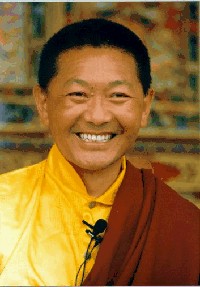 Ringu Tulku Rinpoche was born in Tibet in 1953, and escaped with his family to Sikkim in 1960. He studied at the Namgyal Institute of Tibetology in Gangtok, and Sampurnaanda Sanskrit University in Varanasi. He was a Professor of Tibetology in Sikkim for 17 years. Since 1990 he has been teaching at various Buddhist centers in the West, primarily in Europe. He has been a visiting faculty member at Naropa University in Boulder, Colorado, since 1997. He founded Bodhicharya, an international organization to preserve and transmit Buddhist teachings. Rinpoche's home monastery in Tibet, Rigul Monastery, is currently being expanded through his support.