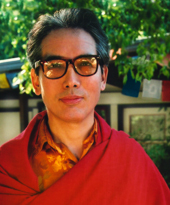 Traleg Kyabgon Rinpoche was born in 1955 in Nangchen, Eastern Tibet. He was enthroned as the Supreme Abbott of Thrangu Monastery at age two by [His Holiness Gyalwa Karmapa]. Rinpoche had to flee his native land at the age of four and escaped with his party to Bhutan and from there to Rumtek, the headquarters of His Holiness the XVI Gyalwa Karmapa in Sikkim. Rinpoche was educated by His Holiness with the other young tulkus in exile until he was nine, when he went to Sang-ngak Choling monastery near Darjeeling and studied under the guidance of His Eminence Thugsey Rinpoche. While there he was taught exclusively by Khenpo Noryang and Khenpo Sodar for many years. In order for Rinpoche to receive training in Karma Kagyu tantric ritual practice, His Holiness Karmapa sent Lama Ganga from Buxaduwar to train him. Thus Rinpoche received both Drukpa Kagyu and Karma Kagyu training at Thugsey Rinpoche's monastery.

At sixteen, His Holiness Karmapa] sent Traleg Rinpoche to study at the Sanskrit University of Varanasi, where he had the opportunity to study with khenpos and geshes of all four schools of Tibetan Buddhism until he was nineteen. During this time Rinpoche was under personal care of Khenpo Chodar, also of Sang-ngak Choling monastery. He was subsequently put in charge of the Zangdog Palre Monastery (the glorious copper coloured mountain) in East Bhutan with many of the old monks from his own Thrangu Monastery, including Khenpo Karthar Rinpoche of Karma Triyana Dharmachakra, Woodstock. After Khenpo Karthar’s departure, Rinpoche was placed under the private tutelage of Dregung Khenpo Ngedon by His Holiness Karmapa in order to continue his study of Sutra and Tantra. When Rinpoche was twenty-two he returned to Rumtek to be with His Holiness Karmapa. In 1980, at twenty-five years of age, Rinpoche arrived in Australia and established Kagyu E-Vam Buddhist Institute two years later. Rinpoche was also the spiritual head of Kamalashila Institute (Germany), one of the main Kagyu centers in Europe, for five years.

Traleg Rinpoche was recognized as the ninth incarnation of the Traleg line by His Holiness the XVI Gyalwa Karmapa and was accorded the title Kyabgon, a significant distinction retained by only a few lineage holders of the Tibetan tradition. The first Traleg tulku, Nyima Tashi, was recognized by the seventh Karmapa and became the supreme abbot of Thrangu Monastery. The names of the nine Traleg tulkus are as follows: 1) Nyima Tashi, 2) Nyima Gyurme, 3) Nyima Salje, 4) Chogyal Nyima, 5) Trinley Nyima, 6) Yeshe Nyima, 7) Kunchab Nyima, 8) Shedrub Chokyi Nyima and 9) Tenpa Rabgye Trinley Nyima.

The Traleg line is one of the most important Kagyu tulku lineages in Tibet. It is traced back to the time of Saltong Shogam, one of the Three Men of Kham who were among the five closest students to Gampopa and the only students to receive the complete transmission of both Vajrayana and Mahamudra instructions from him. (A more extensive biography of the Traleg tulkus by Khenpo Karthar Rinpoche can be found here).

Rinpoche regularly gives lectures and seminars world-wide on Buddhism and related topics, and has become well-known for his erudition, fluency in English and background in western psychology and comparative religion. He is especially respected for his skill in working with people of diverse interests, ages, and backgrounds. Rinpoche has both a strict traditional Buddhist education and a comprehensive Western education, holding a degree from La Trobe University and is currently engaged in academic research for a Doctoral dissertation.

The Benevolent Mind: A Manual in Mind Training

Essence of Buddhism has been published in a number of languages including Portuguese, French and Dutch and is now in its third printing.