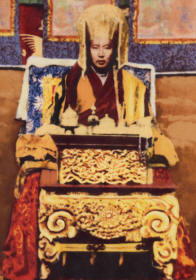 The 6th Gyalwang Drukpa Mipham Chokyi Wangpo (1884-1930), took birth in the family of Tsering Dorje, a nephew of the 14th Karmapa. His principal guru was the supreme siddha, Drubwang Shakya Shri, a peerless spiritual luminary exemplifying both the Kagyud and Nyingma traditions, and from whom he received all the secret transmissions. Mipam Chokyi Wangpo was also active politically. When the Younghusband Expedition came to Tibet in 1904, and the 13th Dalai Lama sought asylum in China, Mipham Chokyi Wangpo used his priest-patron relationship with Ugyen Wangchuk, the dynamic ruler of Bhutan, and urged him to mediate and seek the withdrawal of British forces from Tibet.

Foreseeing future difficulties for the Drukpa lineage, Mipham Chokyi Wangpo took the daughter of siddha Drubwang Shakya Shri as his secret consort, and their son, Thuksey Rinpoche, was destined to carry on the Drukpa Lineage in exile during the lives of both the 11th and the 12th Gyalwang Drukpas. When Mipham Chokyi Wangpo was cremated, numerous relics were discovered among the ashes, including images of Avalokiteshvara which are still among the Drukpa treasures.