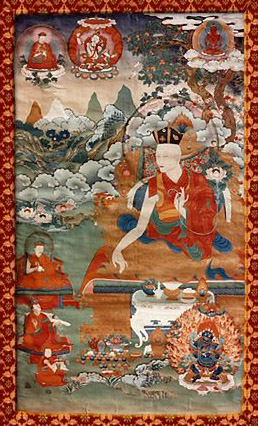 The Thirteenth Karmapa, Dudul Dorje (1733-1797) was born at Champa Drongsar in Southern Tibet. He was recognized by Kato Rigdzin Tsewang Norbu and Situ Chokyi Jungnay.

Tibet was being ruled by the seventh Dalai Lama, Kalzang Gyatso, and his prime minister Sonam Topgyal at the time. As they wanted all government officials to be Gelugpa followers, that rule was initiated. Previously, officials who adhered to other traditions had been allowed to work in the government's administration. Because of this political decision, it became necessary to request the Dalai Lama's seal of approval of the new Karmapa reincarnation. This was a purely political matter brought about by the sectarianism of the time.

The Karmapa was brought to Tsurphu Monastery when five years old. At the age of twelve he received all the Kagyu teachings from Situ Chokyi Jungnay and the sixth Kyabgon Drukchen, Kagyu Thinley Shingta. He also received Nyingma teachings from Rigdzin Tsewang Norbu. Problems arose concerning the tenth Shamar reincarnation, when the Gyaltsap Tulku claimed that the son of the well-known Ger Namsay Ling family was the reincarnation and the Karmapa and the Situpa declared that the Panchen Lama's younger brother was the Shamar reincarnation. After a series of difficulties the dispute was settled. It was recognized that Gyaltsap had failed to find the true reincarnation.

Thus the Karmapa and the Situpa jointly recognized the tenth Shamarpa, Mipham Chodrub Gyamtso. He became a principal disciple of both of them.

Dudul Dorje also found and identified the ninth Situpa, Pema Nyinche Wangpo. Both the tenth Shamar and the ninth Situ were close disciples of the Karmapa, and both became lineage holders. Karmapa Dudul Dorje passed away in his sixty-fourth year.