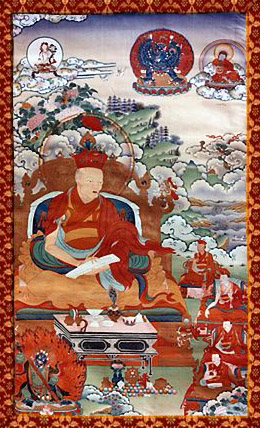 Chökyi Jungne (chos kyi 'byung gnas (1700-1774), a student of the 12th Karmapa byang chub rdo rje (1703-1732). A great master and prolific writer. He was not only an exceptionally accomplished master, but also a great scholar, who produced 13 volumes of writings, and famous for his travels. He visited Nepal on two occasions and was praised there by the Indian scholar Jayamangala for the depths of his learning and understanding. On his second visit there, in 1748, he met again with Kathok Rigdzin Tsewang Norbu and received from him many transmissions of the Jonang tradition, especially on the view of Shentong. Situ and Tsewang Norbu were mainly responsible for a revival of the teachings of the Jonangpa in Central and Eastern Tibet. For an overview of his collected works, see the index for his Situ Chökyi Jungne Sungbum.

The eighth Shamarpa, Chokyi Dondrub, was Situ Chokyi Jungnay's guru. Situpa, in his autobiography, tells the reader that he regards Shamarpa as the embodiment of Amithaba, the Buddha of Boundless Light, and that their meeting brought meaning to his life.

The twelfth Karmapa, Changchub Dorje and the eighth Shamarpa, Palchen Choyki Dondrub, met with Situ Chokyi Jungnay in East Tibet on their way to China in 1735. They told Situpa that they would not return to Tibet and instructed him to take charge of the Karma Kagyu lineage until their reincarnations were found.

When Situ Chokyi Jungnay heard of the deaths of both the Karmapa and the Shamarpa in China, he began a search for their reincarnations. With the help of the Nyingma Master Kato Rigdzin Tsewang Norbu, he found and installed the 13th Karmapa, Dudul Dorje, and the 9th Shamarpa, Geway Jungnay. As the lineage holder, Situpa was able to give the entire cycle of the Kagyu teachings to the 13th Karmapa. The Shamarpa, however, lived only for eight years. Later the Karmapa, Situpa and Kato Rigdzin Tsewang Norbu recognized a younger brother of the 4th Panchen Lama, Palden Yeshe, as Shamarpa's reincarnation. However, the 7th Gyaltsab Rinpoche (1699-1765) had already appointed the son of the wealthy Namsayling family as the reincarnation. He was supported in this by many monks of the Yangpachen Monastery, Shamarpa's seat in Tibet.

This controversy was taken to court, and it was resolved that the Karmapa, Situpa and Kato Rigdzin Tsewang Norbu had found the authentic reincarnation, who was then installed and received teachings from both the Karmapa and the Situpa.