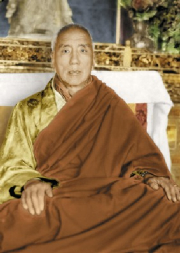 Wisdom embodiment of all the buddhas and their bodhisattva heirs,
Sovereign ruler present throughout the whole of space and time,
Spontaneously arisen primal buddha, transcendent conqueror,
Lord and protector Manjughosha, to you I pray!

Powerful master of wisdom, Manjushrimitra,
Vimalamitra, who gained an indestructible vajra form,
Chakrasamvara in person, Vajraghantipa,
And the great pandita Pratiharanandamati,1 to you I pray!

Great omniscient one in this troubled age, Jikmé Lingpa,
Lord of siddhas, Yeshe Dorje23, no different from
Jamyang Khyentse Wangpo, receiver of the seven special transmissions24,
And Jamyang Lodrö Gyatso,25 to you I pray!

In this life and in future, until I attain enlightenment,
May I never be separated from you, my precious master,
May I always experience the nectar of your instructions, your secret speech,
And may my own and others’ welfare be accomplished spontaneously!

This was written by Chökyi Lodrö in order to fulfil the request of his devoted disciples.

1 - Tib. sgo mtha’ yas pa’i blo gros. According to Jamgön Kongtrul’s biography of Jamyang Khyentse Wangpo, he was a student of Vasubandhu.
2 - Tsangpa Lhayi Metok is the secret name which King Trisong Deutsen received from Guru Padmasambhava during an empowerment at Samye Chimphu.
3 - Trisong Deutsen’s reincarnation, the son of Mutik Tsenpo, known as Gyalse Lharje, later reborn as a tertön thirteen times.
4 - According to Dilgo Khyentse Rinpoche, Smritijñana, who travelled to Tibet and China, was praised by the pandita Danashila as unrivalled in the whole of India for his learning and accomplishment.
5 - Nyang Ral Nyima Özer (1124-1192). The first of the five sovereign tertöns and a reincarnation of King Trisong Deutsen. Several of his revealed treasures are included in the Rinchen Terdzö, among which the most well known is the Kagye Deshek Düpa and the biography of Guru Rinpoche known as Zanglingma, which has been translated into English by Erik Pema Kunsang. See The Lotus-Born: The Life Story of Padmasambhava, Rangjung Yeshe, 2004.
6 - 1235-80, the nephew of Sakya Pandita.
7 - Drikung Kyobpa Rinchen Pal, who was praised as an emanation of Nagarjuna.
8 - Longchen Rabjam, aka Drimé Özer (1308-1363).
9 - A master physician who compiled the four medical tantras (rgyud bzhi). There were in fact two masters by this name, both associated with the transmission of the medical tantras, the earlier one lived in the eighth and ninth centuries and the later during the twelfth.
10 - Lama Dampa Sonam Gyaltsen (1312-1375), the fifteenth patriarch of Sakya.
11 - Vanaratna (Tib. nags kyi rin chen; 1384-1468) was an important master in the Kalachakra lineage. Originally from Bengal, he was one of the last great Indian scholars to visit Tibet. In fact, according to The Blue Annals, he was referred to as "the last pandita."
12 - ‘gos lo tsa ba gzhon nu dpal, 1392-1481. He studied with more than sixty of the greatest masters of his day, including Je Tsongkhapa and the great pandita Vanaratna, and composed ten volumes of writings, the most famous of his works being the celebrated Blue Annals.
13 - Rin chen mkhyen rab mchog grub (1436-1497) from Zhva lu monastery.
14 - The first Dalai Lama.
15 - 1361-1485.
16 - Mus chen dkon mchog rgyal mtshan (1388-1469), who is best known for compiling, along with his teacher Shyönnu Gyalchok, the blo sbyong brgya rtsa ma, which was recently translated by Geshe Thupten Jinpa as part of the Library of Tibetan Classics series. See Mind Training: The Great Collection, Boston: Wisdom, 2006.
17 - 'jam dbyangs kun dga' bsod nams grags pa rgyal mtshan (1485-1533), aka Sakya Lotsawa Jampé Dorje.
18 - Ngari Panchen Pema Wangyal (1487-1542), one of the greatest scholars of the Nyingma school, famous for his Ascertainment of the Three Sets of Vows (sdom gsum rnam nges). See Perfect Conduct, Dudjom Rinpoche, Boston: Wisdom, 1996.
19 - Nesar Jamyang Khyentse Wangchuk (1524-68), an important holder of the lam ‘bras slob bshad transmission.
20 - (1550?-1602/3) A great master of the Northern Treasures (byang gter) tradition.
21 - The Great Fifth Dalai Lama, Ngawang Lobzang Gyatso (1617-1682).
22 - Sixth Dalai Lama Tsangyang Gyatso (1683-1706/46).
23 - Do Khyentse Yeshe Dorje (1800-1866).
24 - See the biography of Jamyang Khyentse Wangpo by Alak Zenkar Rinpoche.
25 - Jamyang Khyentse Chökyi Lodrö himself.