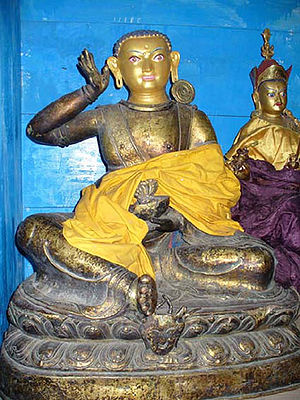 Famed yogi and patriarch of the Kagyu lineage. One of the most famous yogis and poets in Tibetan religious history. Most of the teachings of the Kagyu schools passed through him. He was the main disciple of Marpa, the translator. His two main students were his “sun-like” disciple Gampopa and his “moon-like“ disciple Rechungpa. The picture shows one of three very old and sacred statues of Milarepa which are kept in Lapchi (la phyi), one of the places where Milarepa stayed for a long time meditating in various caves. This particular one belonged to Tsang Nyon Heruka (gtsang smyon he ru ka), (1452-1507) who compiled and published Milarepa’s biography (mi la rnam thar) and spiritual songs (mi la mgur 'bum) while doing retreat in Lapchi in 1488.

Milarepa (1040-1123) was born in the Iron Dragon year of the first sexagenary cycle in a place called Kya Ngatsa in Gungtang in Upper Tibet. He first learned black magic and killed many enemies. Later, feeling remorse for his negative actions, he went to Lhodrak to meet the great Marpa Rinpoché. For about six years and eight months, Marpa made him undergo great hardship for the sake of the Dharma, such as building a nine storey tower, before he finally granted him all the empowerments and instructions. At the age of forty-five, in the Wood Mouse year (1084), he went to Upper Tibet, and for nine years, moved through Kyirong and Nyal. There he endured hardships, such as wearing only a simple cotton cloth and sustaining himself on nettles, and meditated with such fierce determination that he gained the supreme accomplishment within that very lifetime. Then he went to other places, coming and going, giving instructions of the Secret Mantra to those who were worthy disciples, and composing many songs of realisation. Among the many students he produced were Rechungpa and Dagpo Lhajé (Gampopa). He upheld the lineage of practice of Marpa Rinpoche, while Ngog Chöku Dorje, Tsurtön Wangi Dorje and Meton Tsonpo--who together with Milarepa form "The four great pillars" or main disciples of Marpa Lotsawa--upheld the scriptural lineage. Finally, in the Water Hare year of the second sexagenary cycle, he departed.

and the star-like sons: