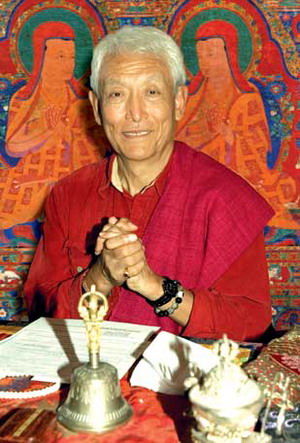 At the age of 7, he was recognized as a reincarnation of Sevan Repa, a heart disciple of Milarepa, Tibet’s great 11th century poet-saint. Rinpoche entered Ngor Monastery at eight and was ordained as a monk at sixteen. In 1959, he was Vice-Abbot [Shabdrung] of the Sakyapa Ngor Thartse Monastery, of which his older brother Sonam Gyatso, Thartse Khen Rinpoche, was abbot. He escaped Tibet with his countrymen at the time of Chinese invasion.

In 1972 Rinpoche came to America and at the request of His Holiness the Dalai Lama joined Geshe Wangyal in New Jersey. Later, at the requests of students he came to Kensington, California and established the Ewam Choden Tibetan Buddhist Center. Lama Kunga has also taught in New Jersey, New York, Washington, D.C., Wisconsin, Oregon, Florida, Utah, Minnesota, and Arkansas.

Over his years in America Lama Kunga was hosted the great masters of many traditions of Tibetan Buddhism at Ewam Choden. These masters include:

With unparalleled patience and generosity Lama Kunga has responded to the heartfelt supplication of his students and taught, line by line, word by word, week after week, many of the great jewels of the Sakya tradition including:

Commentaries on the Tradition of Vajrayogini (Naropa's Khecari) by

Lama Kunga is also an avid golfer and has been featured in Golf Digest magazine and on ESPN.