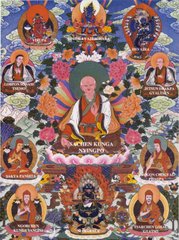 The Sakya tradition is closely associated with the ancient Tibetan Khon lineage, that according to tradition originated from celestial beings. The lineage has descended until the present day. Khon Konchok Gyelpo (1034-1102) is considered the founder of the Sakya tradition.

In the eleventh century, due to karmic obscurations at that time, dharma practice became very lax and corrupted in Tsang. The head of the family, Sherab Tsultrim, decided that it was time to seek out the new tantra teachings from India. The younger brother, Konchog Gyalpo, studied with Drogmi Lotsawa.

Khon Konchog Gyalpo built the first temple named Gorum Zimchi Karpo in 1073. The temple was built at a location with gray earth (sa skya)at the southern part of the Tsang providence. This place was predicted by both Guru Rinpoche and Lord Atisha to be a place where bodhisattvas and buddhas would appear. Lord Atisha on his way from India to Tibet in 1040 C.E was said to have made offerings in the location where the monastery would later be built. He also prophesied that this place would witness one bodhisattva Avalokiteshvara incarnation, seven bodhisattva Manjushri incarnations and one bodhisattva Vajrapani incarnation.

This location gave the tradition the name Sakya, even if Khon and lha rig are also equivalent names.

The origins of the specific Sakya doctrines are from the Indian yogi Virupa that transmitted teachings to Gayadhara, that in turn has a Tibetan disciple by the name of Drogmi Shakya Yeshe. Drogmi travelled to India and receive many teachings and empowerments, including the so called Lamdre transmission that originated from Virupa.

Drogmi had a disciple by the name of Khon Konchok Gyelpo that built a monastery in the Tsang providence of central Tibet, and called it Sakya which means 'grey earth' in Tibetan.

The current head of the Sakya tradition is His Holiness Sakya Trizin.

For more information, see Sakya Masters for information about many Sakya lamas.

See the Sakya Literature index for references to Sakya material.