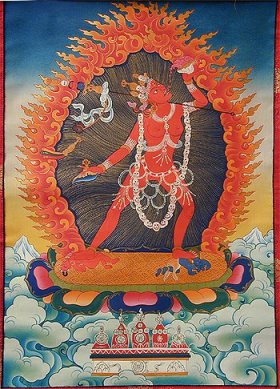 Vajrayogini, in the Naropa tradition

Vajrayogini (rdo rje rnal 'byor ma). A semiwrathful yidam. She is red, with one face and two arms, young and beautiful but enraged and wearing ornaments of human bones. She represents the transformation of ignorance and passion into shunyata and compassion.

In India there were many Vajrayogini traditions, only few were transmitted to Tibet.

In the Kagyu tradition, her sadhana is often given as the students's entry into Anuttara Yoga practice. In this tradition Vajrayogini is called Vajravarahi.

The Sakya tradition has a special Vajrayogini lineage going back to Naropa, who only transmitted this lineage to the Phamthingka brothers, and from them it was transmitted to the Sakya lineage in Tibet.

The Gelug tradition received the lineage from the Sakya lineage, and it's now a separate lineage.

bdud mgon - maranatha, [Epithet of gayadhara, the protector of the vajrayogini sadhana] [RY]

me - 1) fire, flame, ember [Notes this is to describe the source of dharmas in vajrayogini's secret place, another suggestion was "glowing like a fire mandala"]; 2) anaka, (the 50th year, male fire dragon) [IW]