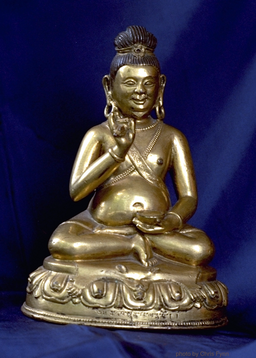 The "Crazy Yogi of Tsang“, a great master of the Kagyu school. Compiler and editor of the biographies and spiritual songs of Marpa the translator and Jetsun Milarepa. He meditated for extended periods of time in all the places that had become famous through Milarepa and other early Kagyu masters, like Lapchi, Tise, Chubar, Tsari etc. He travelled extensively in the Tibetan/Nepalese border areas and visited Lo Mantang, (blo smon thang), the capital of present-day Mustang in Northwestern Nepal several times. In 1504 he visited the Kathmandu valley and sponsored extensive restoration works on the great stupa of Svayambhunath, one of the most important buddhist pilgrimage sites in Nepal. This event is recorded in the chronicles of the Nepalese Malla-Kings. According to Tsang Nyon’s biography, composed by his disciple Gotsang Repa Natsog Rangdrol (rgod tshang ras pa sna tshogs rang grol), it was one of his aims to revive the ideals and practice of the early Kagyu masters of performing extended retreats in isolated mountain areas and caves. Apparently he was successful because his contemporary, the 7th Karmapa Chodrag Gyatso (chos grags rgya mtsho), (1454-1506), composed a beautiful poem praising Tsang Nyon’s great realisation and accomplishments.