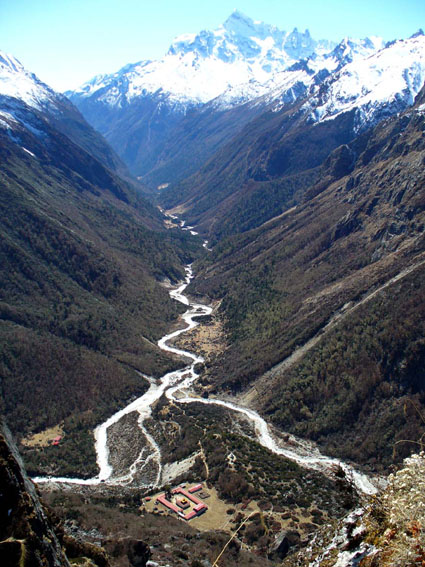 A view from the "Crest Cave" on Lapchi mountain, Nov. 2005. The mountain in the distance is known as "Dorje Kundragma" (rdo rje kun grags ma), seat of one of the twelve female protectors of Tibet, the Twelve Tenma Goddesses. Below, the temple of Chöra Gephel Ling.

An area mostly situated in Nepal, just at the border of Tibet and Nepal, north of Kathmandu. East of Nyanang (gnya' nang) and west of Drin Chubar (brin chu dbar). One of the most important places which where frequented by Milarepa, (rje btsun mi la ras pa) for a long time. Other great masters who stayed there, most of them of one or the other Kagyu school, include Rechungpa (ras chung pa, ras chung rdo rje grags pa), Nyö Lhanangpa (gnyos lha nang pa), Tsang Nyon Heruka (gtsang smyon he ru ka), the "Victorious Hermit of Lapchi" Lapchiwa Namkha Gyaltsen (rgyal la phyi pa nam mkha' rgyal mtshan) who was said to be an incarnation of Milarepa's mind aspect and who spent 31 years there before he passed away, and Shabkar Tsogdruk Rangdrol (zhabs dkar tshogs drug rang grol). Together with Kangkar Tise (or Kailash) and Tsari, Lapchi is one of the three holy mountain ranges that are believed to be the abode of Chakrasamvara. Together with the other two, Lapchi is listed among the "24 sacred places of the world" where it is identified as Godavari. There are twelve caves in Lapchi in eight of which Milarepa has meditated for considerable lengths of time: ze phug or Crest Cave, g.yu thog phug, sbas pa gong or Revelation of All Secrets, sbas pa 'og, sbas pa nub, ras chen phug, ras chung phug, stag tshang phug, seng khyams phug, bdud 'dul phug mo che, lung stan phug or Prophesied Cave of the Great Forest and gnam phug ma, the most famous one being bdud 'dul phug mo che, the "Cave of the Subjugation of Mara", where he subdued all evil forces. It is there where Milarepa survived for six month on only one measure of tsampa, after it had snowed continuously for 18 days and nights. He mastered the practice of Tummo (gtum mo) there and displayed various miracles like transforming his body into fire and water etc. A small monastery, Chöra Gephel Ling (chos ra dge 'phel gling), founded in the 1830s by Shabkar Tsogdruk Rangdrol, is situated just below this cave, on a small level plain called the chos 'byung ma thang. The actual mountain range of la phyi itself is considered to be the mandala of Chakrasamvara with a retinue of 62 deities. It is surrounded by three prominent mountains, the dkar po 'bum ye, nag po 'bum ye and gser po 'bum ye. These mountains are considered to be the palaces of Avalokiteshvara, Vajrapani and Manjushri respectively. The entire place is considered to be the essential mandala of Vajrayogini. Viewed from the highest cave, the ze phug, one can easily see the triangular shape of the area, with a triangle of sky above, a triangle of earth below and a triangle of water in between (see picture). For centuries Lapchi has been taken care of by masters of the Drikung Kagyu school. Since the mid-80s the Ven. Nubpa Rinpoche has supervised the reconstruction of this sacred place. Presently about 40 retreatants are in long-term retreats there.

The White Snow Mountain, Kangkar Tise (gangs dkar ti se), Mt. Kailash (literally 'Silver Mountain'), is one of the world's great holy mountains, sacred to Hindus and Buddhists alike. It is one of the so-called "Three Holy Places of Tibet", associated with the body, speech, and mind aspects of Chakrasamvara and Vajravarahi. The other two are Lapchi (la phyi) and Tsari (tsa ri). These three are also listed among the "Twenty-four Great Sacred Places" (Tib. - gnas chen nyer gzhi), (Skt. - pitha) of the world, Mt. Kailash being identified as Himavat, Lapchi as Godavari, and Tsari as both Caritra and Devikota. There are several descriptions of and guides to Mt. Kailash, including one written by Konchog Tendzin Chokyi Lodro, the sixth Drigung Chungtsang ('bri gung chung tshang dkon mchog bstan 'dzin chos kyi blo gros, 1829-1906), and a recent one composed by Choying Dorje (1990), hereafter quoted as MK.