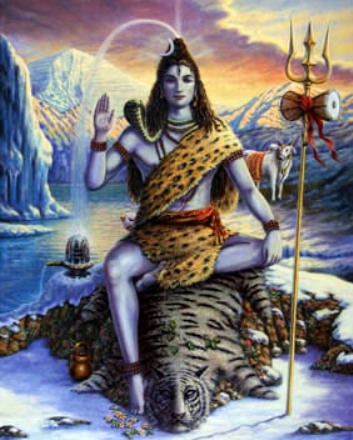 Please expand other particulars regarding lha chen or Mahadeva here.

In particular, holders of the Drigung Kagyu lineage frequented this place in great numbers. Drigung Jigten Gonpo ('bri gung 'jigs rten mgon po 1143-1217) had a dream in which the guardian deities of the Three Sacred Places of Tsari, Lapchi, and Kailash came and prostrated themselves before him, requesting him to go and bless their territories. Jigten Gonpo replied that he would send great meditators instead. Accordingly, he dispatched 80 hermits to each place. Some years later, he reputedly sent 900 hermits and finally 55,525 practitioners to each site (see Huber, 1989). At Kailash these were under the leadership of the great pandita Yakgangpa (pan chen yag sgang pa), who is also called (according to MK, pg. 59), Dorzin Guhya Gangpa (rdor 'dzin guh ya sgang pa); at Lapchi the practitioners were led by Geshe Paldrak (dge bshes dpal grags, 12th-13th century); and at Tsari they were under the guidance of Dorzin Gowoche (rdor 'dzin mgo bo che). In the Three Sacred Places of Tsari, Lapchi, and Kailash, Dorzin (rdor 'dzin = Holder of the Vajra) usually refers to a spiritual master or an administrator sent from Drigung Monastery as representative of the Drigung hierarchs. (see Petech 1978, 317.) (MR-ShabkarNotes)