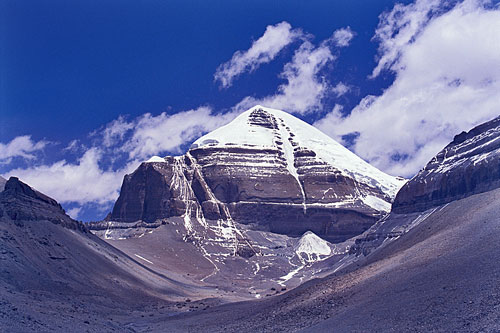 gangs dkar ti se - The White Snow Mountain, Kangkar Tisey, Mt. Kailash (lit. Silver Mountain), is one of the world's great holy mountains, sacred to Hindus and Buddhists alike. It is one of the so-called "Three Holy Places of Tibet," associated with the body, speech, and mind aspects of Chakrasamvara and Vajra Varahi. The other two are Lapchi (la phyi) and Tsari (tsa ri). These three are also listed among the "twenty-four sacred places" (Skt. pitha) of the world, Kailash being identified as Himavat, Labchi as Godavari, and Tsari as both Caritra and Devikota. There are several descriptions of and guides to Mt. Kailash, including one written by Könchok Tendzin Chökyi Lodrö, the sixth Drigung Chungtsang ('bri gung chung tshang dkon mchog bstan 'dzin chos kyi blo gros, 1829-1906), and a recent one composed originally by Chöying Dorje, which came to light in (1990). (MR) (RY)

The White Snow Mountain, Kangkar Tise (gangs dkar ti se), Mt. Kailash (literally 'Silver Mountain'), is one of the world's great holy mountains, sacred to Hindus and Buddhists alike. It is one of the so-called "Three Holy Places of Tibet", associated with the body, speech, and mind aspects of Chakrasamvara and Vajravarahi. The other two are Lapchi (la phyi) and Tsari (tsa ri). These three are also listed among the "Twenty-four Great Sacred Places" (Tib. - gnas chen nyer gzhi), (Skt. - pitha) of the world, Mt. Kailash being identified as Himavat, Lapchi as Godhavari, and Tsari as both Caritra and Devikota. There are several descriptions of and guides to Mt. Kailash, including one written by Konchog Tendzin Chokyi Lodro, the sixth Drigung Chungtsang ('bri gung chung tshang dkon mchog bstan 'dzin chos kyi blo gros, 1829-1906), and a recent one originally composed by Choying Dorje which came to light in (1990), hereafter quoted as MK.

Mt. Kailash was later blessed by Guru Padmasambhava, and became famous after Jetsun Milarepa lived there and held his contest of miracles with Naro Bonchung. (When Jetsun Milarepa and the Bonpo Naro Bonchung held their famous contest of miracles to decide who would retain supremacy over the sacred mountain, they left imprints of their feet in the rocks and many other miraculous signs. See G. C. C. Chang, (1962, vol. 1, pp. 215-224). Later Gyalwa Gotsangpa (rgod tshang pa mgon po rdo rje), Linge Repa (gling rje ras pa) (1128-1188), and many other great meditators lived ascetic lives at the foot of Mt. Kailash.

In particular, holders of the Drigung Kagyu lineage frequented this place in great numbers. Drigung Jigten Gonpo ('bri gung 'jigs rten mgon po 1143-1217) had a dream in which the guardian deities of the Three Sacred Places of Tsari, Lapchi, and Kailash came and prostrated themselves before him, requesting him to go and bless their territories. Jigten Gonpo replied that he would send great meditators instead. Accordingly, he dispatched 80 hermits to each place. Some years later, he reputedly sent 900 hermits and finally 55,525 practitioners to each site (see Huber, 1989). At Kailash these were under the leadership of the great pandita Yakgangpa (pan chen yag sgang pa), who is also called (according to MK, pg. 59), Dorzin Guhya Gangpa (rdor 'dzin gu hya sgang pa); at Lapchi the practitioners were led by Geshe Paldrak (dge bshes dpal grags, 12th-13th century); and at Tsari they were under the guidance of Dorzin Gowoche (rdor 'dzin mgo bo che). In the Three Sacred Places of Tsari, Lapchi, and Kailash, Dorzin (rdor 'dzin = Holder of the Vajra) usually refers to a spiritual master or an administrator sent from Drigung Monastery as representative of the Drigung hierarchs. (see Petech 1978, 317.) (MR-ShabkarNotes).