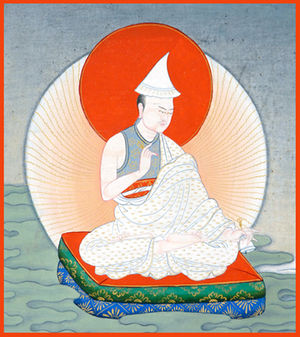 Patriarch of the Kagyu lineage. The so-called "moon-like“ disciple and foremost heart son of Milarepa. He met Milarepa at the age of eleven and spent many years studying and practising under the guidance of his master. He was a Repa (ras pa) like Milarepa, unlike Gampopa, who was a fully ordained monk. At one time he even was married to a local princess for a while, before taking to the homeless life of a wandering yogin again. Rechungpa travelled to India three times and obtained teachings and transmissions which Marpa had not managed to receive in his time. In fact he was prophecied by Naropa, who said to Marpa that a descendant of his lineage would eventually come to receive more instructions on certain teachings. In particular he received the entire “nine-fold cycle of the formless Dakinis”, the lus med mkha' 'gro skor dgu, of which Marpa had received only five parts, from Tiphupa. Upon Rechungpa's return to Tibet, he presented these teachings to Milarepa. Milarepa transmitted the entire cylce to Ngendzong Repa (ngan dzong ras pa byang chub rgyal po 12th cent.), another of his "Eight Great Sons", who composed arrangements and commentaries on it. His lineage became known as the bde mchog snyan brgyud. Rechungpa's lineage of this cycle, focussing on the practice of Chakrasamvara, is preserved in a corpus of teachings known as the “hearing lineage of Rechungpa”, the ras chung snyan brgyud. Both streams were later re-united by Tsang Nyon Heruka (gtsang smyon he ru ka 1452-1507). Nowadays these teachings are practiced mainly within the Drukpa Kagyu ('brug pa bka' brgyud) school, and by a subsect of the Karma Kagyu, the Surmang Kagyu. Rechungpa’s main teachers in India were the Mahasiddhas Tiphupa and Walacandra. From Walacandra he received many Vajrapani tantras. He also studied under Sumatikirti, from whom he received transmissions and instructions on Jinasagara (rgyal ba rgya mtsho), a red form of Avalokiteshvara which was to become one of the major yidam practices in some of the Kagyu lineages. Back in Tibet he met the Nepalese master Balpo Asu, from whom he received Mahamudra transmissions. Several biographies for Rechungpa exist, the most extensive one authored by Gotsang Repa Natsog Rangdrol, a student of Tsang Nyon Heruka.
Now, without wanting to belittle the great achievments of Je Gampopa in the least, it has to be pointed out that Rechungpa has been consistently mispresented in Tibetan history, especially that of the various Kagyu lineages. The majority of historians of the Kagyu lineages who wrote after the 15th century, and who were invariably members of one or the other of the established dwags po bka' brgyud schools, i.e. the schools that trace their lineage back to Gampopa, naturally had an interest to represent their "founder" as THE main student of Milarepa. Having become powerful and influential, both politically and economically, it did not sit too well with them to admit that Gampopa actually was not mentioned at all among the closest students of Milarepa in some of the early biographies of Milarepa and Rechungpa (several of which were deemed lost but have come to light again in recent years, such as the works authored by don mo ri pa, rgya ldang pa bde chen rdo rje, mon rtse kun dga' dpal ldan, Lama Zhang and the 3rd Karmapa rang byung rdo rje etc.), but merely as one of "six scholarly students who appeared late in Milarepa's life" (see "bzhad pa rdo rje'i rnam thar mgur mching dang bcas pa" also known as "bu chen bcu gnyis", much of it written by ngan dzong ras pa byang chub rgyal po and ras pa zhi ba 'od, two other prominent students of Milarepa). On top of that, both Milarepa and Rechungpa often seem to have severely critcised monasticism and its establishments, again a fact that is hard to accept and repeat for members of any of the surviving Kagyu schools which are predominantly of a monastic nature. From the materials available again nowadays, it is very clear that Rechungpa was Milarepa's undisputed master student and lineage holder and that Milarepa passed on the entirety of his teachings to him, whereas other students, Gampopa among them, received only introductions and general outlines of teachings which Rechungpa had received in full. After Milarepa's passing Gampopa even requested, and received, some transmissions from Rechungpa which he had not managed to get from Milarepa before. Likewise, one of Gampopa's foremost students, the 1st Karmapa dus gsum mkhyen pa (1110-1193) went into the presence of Rechungpa and requested transmissions from him. Lingje Repa Pema Dorje (1128-1188), one of the founders of the Drugpa Kagyu lineage, attempted to meet Rechungpa but reached at his residence only the year after he had passed away (in 1162). He then proceeded to study under Rechungpa's students Khyungtsangpa and Sumton. For more, please refer to the available Tibetan sources or to Peter Roberts' masterful doctoral thesis "The Biographies of Rechungpa - The Evolution of a Tibetan Hagiography", Harris Manchester College, University of Oxford, Oct. 2000, or to his very recent publication "Biographies of Rechungpa" (see link below).